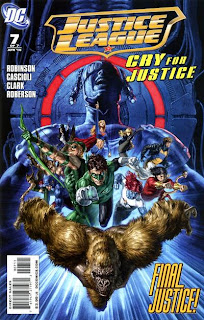 I like a big stupid blockbuster as much as the next person. Massive disasters, bombastic dialogue, it's all good . . . except when the story can't get from point A to point B without characters who are Too Stupid Too Live.

And that sums up every hero in this book. Green Lantern, the Atom, Green Arrow, all these and more are here unable to use their skills and powers, their brains and experience, to foil the schemes of one man. Yes, the destruction of Star City is well underway as this finale issue begins, but the perpetrator, Prometheus, is in League custody. Available to end the destruction are heroes with magic rings, super strength, ultra-speed, and yet not a single building is seen to be saved. Green Lantern doesn't so much as throw up a few supports. Firestorm carries people on lumps of pavement rather than throwing his incredible power set at the big picture. That sort of thing.

With the threat of similar destruction across the world via cunningly planted bombs, the heroes have no choice but to let Prometheus go free in exchange for deactivation codes. Because he can counter any attempt to force him to give up the information - knock out a mental maven via psychic feedback, stop magical attacks - anything. So what if Prometheus is neither magical nor telepathic, he's The Man With the Plan and in the DC Universe (see Batman, Deathstroke etc) a bit of forward thinking always wins the day.

Burying a bomb under a river but want to keep speedsters at bay? No problem, simply arrange it so that unless the 'exact cubic tonnage' of water surrounds the explosive, it goes off. And so on. It's silly, and not in a good way. Prometheus is so brilliant, and the heroes so rubbish, that when it comes down to 'free the guy and get the codes, or let millions die', the good guys are utterly paralysed with indecision in a laughable two-page spread. A decision has to be made and the JLA and chums decide to have a conference call. 'What do we do?' 'No! No way he walks!' 'We're loosing (sic)' 'I don't know what to say.'

This really is excruciating stuff from writer James Robinson; it might work on TV, with quick cuts and split second flashes of dialogue, but laid out on the page it's corny and unconvincing. And the internal monologue given to the blue Starman as he's meant to be helping people would disgrace an afternoon soap. 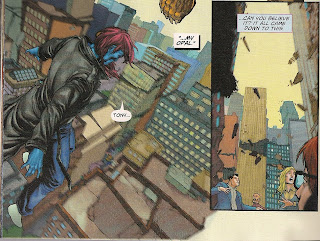 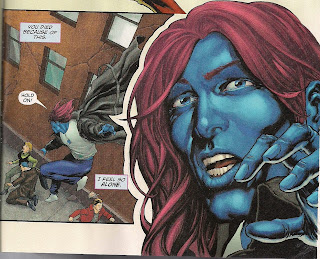 Which is weird, because sometimes you can read a James Robinson comic - such as the recent Starman: Blackest Night - and be thrilled by the subtlety and smarts of the script.

Not here, where you're more likely to laugh at the words given to poor Freddy Freeman, his lips sewn together to prevent him summoning his Marvel-powered form: 'Yeath. Juth get m'to the dewiseth! Matgic of Shaztham!' After a few lines of this I was expecting two magic words: 'Thufferin thuccotash!'

The big emotional moment is the death of Lian, Roy Harper's cute little daughter, crushed by a building. Allegedly 90,000 people perish as Star City falls but poor old Lian - whose demise was cleverly hinted at in the set-after-this Titans #21 a couple of months back - is the only corpse in the book. It sucks to be a superhero's kid, but the tragedies are necessary for the upcoming adventures of Grim Arrow and Stumpy. Super.

The close of this story sees said Ollie Queen finally finds a target
- Prometheus' stupid helmet and the brain matter behind. As it's the end of the mini, suddenly there is something Prometheus hasn't planned for, while a hero is allowed to remember his skill set. The contrivances are a bit rich but nevertheless the death of Prometheus provides the most satisfactory moment of the series.

Mauro Cascioli, Scott Clark and Ibraim Roberson handle the pencils and, backed by a veritable league of inkers and colourists, produce mostly attractive, effective work. While some of the emotional beats called for by the script are a tad OTT, the artists capture them just fine.

And someone had a very good time drawing Starfire's cosmic bottom trying to escape her hips - an honourable DC tradition.

So it's over. Seven issues, most of them annoying, and yet I bought the things so more fool me. I nearly dropped the book once or twice but my faith in James Robinson, along with the saddo aspect of having to know how the story ends, kept bringing me back. Of course, the story isn't ending, as the plights of Ollie Queen and Roy Harper lead into a JLA special, Arsenal mini and an arc in Green Arrow's book. We're promised falls, rises . . . maybe some people will eat this up, but it's not for me. I'll stick with James' current run on the regular JLA book, which is already proving more to my taste than Cry For Justice. I should have cried off after the first issue. 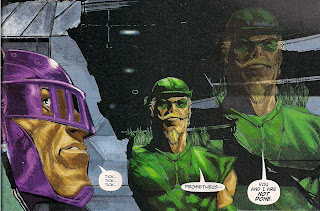 If only Ollie were taking off the mask his homage to Horatio Caine would be complete
Justice League: Cry for Justice #7 review