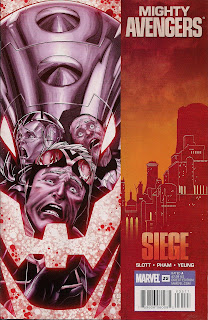 Ultron is the number one Avengers foe, with twisted familial ties to numerous members. Most of all, though, he's linked to Hank Pym, seeing himself as the son who, in the manner of ancient gods, must kill the father.

Being the number one bad guy means he's had numerous encounters with the team, each more humiliating than the last. So how could writer Dan Slott make another father-son run-in fresh?

I've come to think Dan Slott can make any scenario fresh in this book - whether it's Loki's latest deception or Pietro's zillionth temper tantrum, he always makes it entertaining. Here, as well as Hank and Ultron - now, amusingly, referring to himself not by number designation but as Ultron Pym - the mix involves Jocasta and Agents of G.R.A.M.P.A. One-Eyed Jacquie and Ace. Jarvis is around briefly, and we see what Amadeus Cho, Vision, Stature, Quicksilver and the Captain are up to, but they're mainly shown to tie into the Siege event; the main event here is Ultron's commandeering of Infinite Avengers Mansion and 10 billion copies of Jocasta. Along the way we get my favourite panel of this week:

'Snog', in case any non-Brit reader doesn't know the term, means to smooch. And as to whether Hank's planning to kiss Jocasta, well, there are a couple of developments this issue that will have you wondering just how clever, and scary, Hank really is ...

... Ultron certainly knows that if he's a genius robot it's because his 'father' is pretty awesome in the brains department - there's a moment here which shows just how much he respects his creator.

And it's a terrific panel in a book full of them. Penciller Koi Pham's layouts have been getting better with every issue, and inker Craig Yeung works with him to bestow a real spookiness upon Ultron and the Jocasta sisterhood worshipping him. Ace, with his full-face mask sitting atop a business suit, looks like a lunatic, Jacquie is a wannabe Bond babe, Pym a man possessed - but in a very good way. And as the mansion is corrupted by Ultron, becoming a metal reflection of his cybernetic madness, the artists tweak the design convincingly without going haywire with noodling.

They're greatly aided by the colours of John Rauch, which are naturalistic at the start, intensifying as the drama grows. And Dave Lanphear does his usual excellent job with the lettering.

The final page is magnificent; when I saw it, and learned the story's title, it became obvious that Slott and co have something big planned for next month. It's the final issue and it seems they're not clearing house at Infinite Avengers Mansion, they're renovating.
Mighty Avengers #35 review Slott Pham Yeung Rauch Lanphear