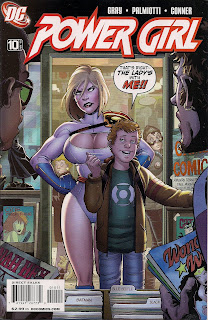 I found myself reading this issue more slowly than usual, news of the creative team's imminent departure having hit. But not too slowly. Said creative team know how to control the pace of the book, no matter how a reader might struggle so best to savour.

So here we have the continuation of last issue's fight with Satanna, Terra's day trip to Starrware, kid blackmailer Fisher getting a lesson in compassion, an attack by Hawkman foes the Manhawks and the proverbial, yet not too predictable, shock ending.

... it's all spiffy. The two fight scenes are superbly staged by artist Amanda Conner, while the dialogue from Justin Gray and Jimmy Palmiotti crackles. Satanna's nagging of Terra for having an unoriginal name is a hoot, especially given how close her own name is to that of DC's top magician. (Mind, she has a point - why would any young heroine not protecting a trademark associate herself with a psychotic teen traitor? Drop Terra, pet. Try Gaea, or Eartha, maybe.)

The Manhawks are always welcome, and it's logical Satanna would try to use them, though in mutating them she's actually made them less scary - here they're standard snarly anthropomorphic birds, whereas previously they were giant birds wearing creepy human masks. Unique. But that's not important right now. Neither is the subplot showing Satanna's talking badger sidekick apparently plotting against her - I expect we'll see the results of that next month.

This issue is more concerned with mentoring, with Karen taking semi-scumbag Fisher under her wing alongside Terra. While he's undoubtedly earned a kicking for taking seedy snaps of Karen and holding them over her head, our heroine sees that he's just a daft, hormonal kid who could benefit from a softly softly approach. After all, his 'requests' of Karen are hardly things of great evil - making him look good at the comic shop, for example. Let's hope he proves worthy of her trust over the next couple of issues.

As for Terra, she shows a harder edge here than previously, giving Karen the chance to continue the good work she does with the young heroes of the JSA. And it's fair to say that this story strand goes interesting places.

Everyone in this book is full of character, from the front and centre heroines to the comic shop gang. And it's all captured beautifully by Conner, who slips in enough interesting background detail for any three normal comics. Here's Fisher shadowing Terra and Peege; there's a mother reaching out to catch her baby after a Manhawk drops it; and check out the cutest cat in comics, begging for a feed. Many of the details - such as a fruit stall outside the comics shop that turns out to be selling clues - have obviously been requested by Gray and Palmiotti for story purposes, but I'm willing to bet Conner has the leeway to embellish the story with cameos and Easter eggs as she wishes.

And it doesn't really matter who decides what goes on the page, it's the results that count. And this creative team sings. More than any other DC comic right now, this is a team book so far as the creators are concerned. I've mentioned three, but colourist Paul Mounts, letterer John J Hill, editors Mike Carlin and Rachel Gluckstern - they're all putting immense care into this comic book too, meaning Power Girl's first year will be remembered with fondness for years to come.
Power Girl #10 review Gray Palmiotti Conner Mounts Hill Carlin Gluckstern