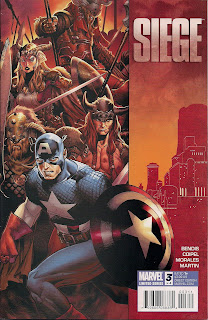 In which the Cavalry whups Norman Osborn's scaly green ass. The thing is, Captain America is back from the dead and Cap's main super power in an Avengers book is to inspire. Lord knows how that works but he appears on the scene and suddenly the heroes of the Marvel Universe stop acting like losers and actually win some fights.

Of course, it helps that in attacking Asgard Osborn has overplayed his hand and the President stops being stupid*, sees Osborn for the evil git he is, and has the USAF go biblical on his H.A.M.M.E.R. aircraft carrier.

Tony Stark is back in classic Iron Man armour to mess with Osborn's rip-off Iron Patriot suit, allowing Spider-Man - yes! - to punch his stupid face. OK, the Sentry is still on the scene and more powerful than a million deii ex machina, but I've no doubt that the combined forces of the heroes will suddenly be able to beat him after all. They'll remember to use psychic abilities, cosmic force fields, genius level brains . . .

. . . or, horribly likely, a speech from Cap. 'OK soldier, you've tried to do right. But you've made a mistake. Don't worry about Ares, he wasn't even American, just give your wife a hug. And cut that damn girly hair . . .'

Don't get me wrong, I loved the 'hoorah moments' in this issue, it's just that I wish they arose organically rather than magically. Suddenly everyone is competent again? I wanted Osborn's downfall to come as the result of heroes using their brains and skills to show him up for what he is, not because he makes mistakes. It's as if writer Brian Bendis has flipped a switch that reads 'Brains and powers ON' to pave the way for the upcoming Heroic Age.

So, there are my qualms. I did enjoy the pacing and dialogue - there's an exchange between Cap and Taskmaster that put a huge smile on my face, for instance. And the art by penciller Olivier Coipel, inker Mark Morales and colourist Laura Martin is sharp and gorgeous. And Chris Eliopoulos's lettering complements the art.

The book's not the best value, though - there are 23 pages of comic strip for $3.99, with the rest of the story pages giving us Maria Hill's view of the battle we've just seen, via a six-page memo to the president. Accompanying this are spot illos consisting of re-used artwork. Are there really any readers out there who prefer this sort of thing to the longer story we'd otherwise get? If DC can give us 30 story pages for $3.99, Marvel sure as heck can too. What will we get next month, architectural plans for a new Asgard? Tony Stark's cocktail recipes? Come on, Marvel - lengthen the story or lower the price.

* Though he is apparently too mean to turn the lights on in the White House war room. Marvel's continual shadowing of Obama, outside of the Buy This Comic, It'll Be Worth Something, Honest, Then Come Back For The Bridge issue of Spider-Man is nuts. Either make up a pretendy president, or show him clearly.
Siege #3 review