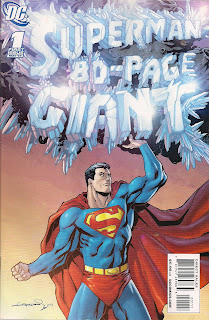 It's an 80-page giant, it's seven new stories by creators DC describes as 'up and coming talent', but is it any good?

We begin with Cold, written by Mike Raicht and drawn by Charles Paul Wilson III and, readers of the recent Superboy run in Adventure Comics will immediately note, coloured by Brian Buccellato. The latter's palette is distinctively autumnal, yet it fits this winter's tale perfectly, matching the colours of childhood memory. The childhood here is, of course, Clark Kent's. Ice skating with Pa and best pal Pete Ross, Clark learns more about his developing powers and himself. It's the type of story we've seen many times, but when it's presented as well as it here, variations on the legend are always welcome. 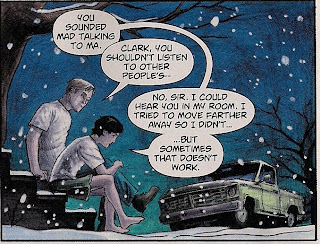 The key word here is naturalism; both script and art hit the perfect register for the story of an extraordinary super-powered boy and his extraordinary regular parents. I particularly like that while Jonathan and Martha Kent are presented as patient and loving, they're not the Solomon-like figures we've sometimes seen. Beautiful stuff.

Letterer Travis Lanham is the first member of the creative crew to grab the attention with the second story, via a smart 'title card' telling us that this stars 'Lois Lane and Clark Kent in Patience-Centered Care'. It's a tale of Mr and Mrs Superman in which Lois is miserable over a flu bug, while her every need is ministered to by loving, attentive Clark. Loving, attentive ... and annoying Clark. Determined to stay by his wife's side, but banished to the next room for fussing around, the way he finds to amuse himself makes for one of the most original Superman stories in years - the guy is positively playful.

Kathryn Immonen and Tonci Zonjic (colouring as well as illustrating) give us a Mr and Mrs Superman for the 21st century while plugging into the screwball comedy of Hollywood's golden age (Clark and Lois even have separate beds!). Immonen provides the zingy one-liners, Zonjic bats them back with expressive ease. This is a treat from start to finish, capturing the sometimes grumpy joy of love. If I don't see Immonen and Zonjic at least get to fill in on a regular Superman issue I'll be disappointed.

Ben McCool comes up with a neat idea for Bugs. The Daily Planet is infested with alien insects and Clark helps out the local exterminator. McCool captures the essence of Superman-while-Clark, light-hearted but taking his work seriously, and never so keen to protect his secret ID that innocents are endangered.

And Matt Camp's pencils and inks are pretty masterful for an 'up and comer' - he begins in the mundanity of the Daily Planet newsroom and gradually ups the creep factor as Clark and self-styled expert Taylor descend to the basement. There's a sophistication that recalls Brian Bolland, and the visuals are superbly coloured by Nei Ruffino. All in all, this is a clever short showing Clark doesn't need the costume to do the super-stuff.

The splash page of Why Metropolis? is grabby to say the least, with that man Lanham getting to use probably the largest word balloon font of his career. And the story isn't bad either. Pat McCallum has three career criminals explain to a newbie why they've chosen to pull a job in arguably the best protected city in America. It's refreshing to hear the hood in the street's views on various superheroes (and the Green Arrow vignette shows us that he really doesn't need a barrowload of grit to be appealing). 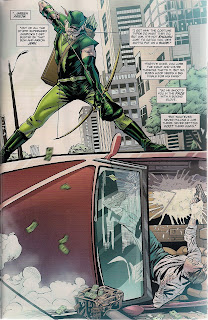 But crooks and heroes apart, it's Superman who finally steals the show. And courtesy of penciller Mike Shoyket and inker Rick Perrotta, we get a Superman who's daringly off-model, looking like a prizefighter rather than the classically handsome guy we're used to. There's a kindness here that fits Superman's words, and an earnestness in the eyes that stops short of sappiness. It's a clever piece of illustration. As for the crooks, Shoyket and Perrotta catch their frustrated fatalism perfectly.

Superman is My Co-Pilot, by Jason Hall and Julian Lopez, introduces us to Stan, a near-agoraphobic due to fear of the costumed crazies who populate Metropolis. Then one day he's saved by Superman and . . . well, hopefully you'll read this story for yourself and find out. Let's just say he seems to be channelling Silver Age Lois Lane (and no, that doesn't mean he's trying to trick Supie into marriage). Hall's first person narration has me rooting for Stan, even as I want to slap him, while his dialogue is sharply understated.

Penciller Lopez brings Stan to life, and in one of this book's few supervillain scenes, provides a crackling action shot. I've seen work by inker Bit previously - he's good - but his colours here are a revelation, capturing the hues of a city with rare intelligence. And his skin tones are first class. The combination of creators and subject makes for an enjoyable parable.

The kernel of the charming Five Minutes is another simple idea - how can Clark fill a few moments while waiting for Lois - but writer Rik Hoskin spins it into a thing of wonder. There are no big villains here, it's strictly Superman as community pal, right down to the classic cat in tree shtick. 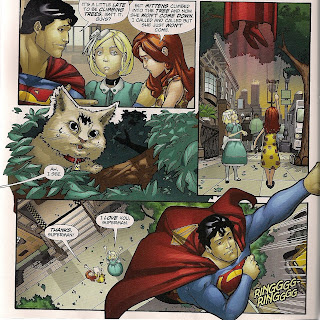 And I had a great time, just enjoying the interaction between citizens and a man who never sees himself as saviour. Writer Rik Hoskin shows us the warmth of Superman, and provides another look at the quiet strength of the Clark/Lois relationship. And penciller RB Silva's cityscapes are stunning, filled with depth and detail - there's even a person dressed as a duck selling balloons (then again, this being Metropolis it may simply be a giant duck). And, inked by Alexandre Palamaro and coloured by Javier Tartaglia, his Superman is pretty fine too - majestic, yet human.

Sean Ryan's story, the last in the book, brings the giant's occasional theme of how ordinary folk view Superman to the fore with a series of conversations about a battle he's having with Bizarro. As the conversational baton passes from person to person we move from Metropolis to Arizona, where hero fights twisted mirror image. And then we get to the final image, and the story's very appropriate title. Sorry, not telling! Apart from a stream of spit/blood that's out of place with this giant's overall gentle tone, I love Clayton Henry's art here. 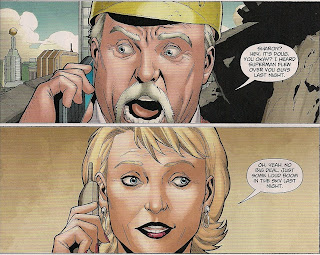 There's an echo of the great Dave Gibbons in some of the faces, but all credit to Henry for helping ensure an experimental idea works. And when we finally see his Superman, boy, it's good. Colourist Brian Reber makes things nice and bright, while Sal Cipriano's letters are smart (what's the matter, Lanham, couldn't be bothered?).

So that's seven shorts and seven hits, making this the best of DC's recent 80-pagers. Even the cover by Aaron Lopresti, a veteran but up and coming so far as the Superman books are concerned, is strikingly original.

Whether you're a fan of Superman or simply human interest stories set in a world of wonder, I can't recommend this special enough.
Superman 80-Page Giant #1 review