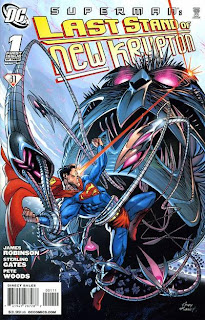 And so it begins, the three-issue mini that promises to cap the year-long storyline that has seen thousands of super-powered, earth-hating Kryptonians populating a new world on the far side of the sun. Given the set-up, my impression was that we'd see epic encounters between the New Kryptonians and the powers of the wider DC Universe . . . but the scenario has hardly been mentioned outside of the Superman line. And DC's pushing of the Blackest Night event has allowed World of New Krypton to wither in the shade. Plus, while I could buy Superman hanging around to keep an eye on his people, the suspension of belief required to accept he could serve in the army of mass murderer General Zod has proven too much.

The WoNK mini series began well but soon became bogged down with dull politics, visits from toothless alien races and a murder mystery that pretty much killed what interest I had left. So thank goodness the end is in sight courtesy of the return of star-spanning conqueror Brainiac. His attack this issue prompts the Kryptonians to stop squabbling among themselves and fight back with their new abilities. Superman finally realises Zod isn't someone he can work for. Supergirl declares Superboy her cousin in a sweet scene as the Legion of Super-Heroes shows up to lend a hand. And the good guys keep interrupting the saving of lives to have chats with Zod, which is mighty odd.

James Robinson and Sterling Gates co-write, producing a workmanlike script that gets us from point A to point B. The return of Brainiac brings the story full circle rather than adding anything new, and the Legion's cavalry-like appearance soon peters out amid more Zod posturing. The whole thing feels like just another issue of WoNK rather than cake-saving icing.

Pete Woods brings his A-game to the art, providing lush illustrations - there's an especially good-looking splash of Commander El reclaiming his Superman identity. The colours of Blond only add to an attractive job.

So, a disappointing issue but the addition of the Legion is enough to keep me reading. With luck the story will improve to the level of the art.
Superman: Last Stand of New Krypton #1 review