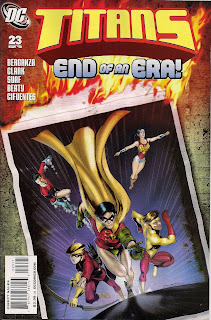 Now here's a novelty - a Titans story set on one of the other worlds in the DC Multiverse. While the team's basic history - both ancient and recent - is the same, there are some interesting divergences.

Rather than a nicely raised rich man's ward, Speedy was a kid thug who taught Wonder Girl, Robin, Aqualad and Kid Flash to 'fight dirty' - but despite the tips, Kid Flash and Robin always hated him.

The original five Teen Titans only just avoided become a gang of degenerate bullies, grimacing as they pummelled costumed idiots.

On discovering Speedy's drug addiction, Robin and Kid Flash told him to bugger off and get himself sorted out.

It all makes for a fascinating look at how the regular DC Universe Titans would be had they been written as arseholes from their earliest outings. And the originals are no better in the story's present day scenes - Donna punches Dick's lights out when he deigns to get upset that Roy has been maimed by Prometheus and his daughter killed. There's humour too; the first thing this Earth's Dick Grayson does when things calm down post-Prometheus and Blackest Night is order new statues for Titans Tower's Hall of Death. Gotta keep the old place nice, eh?

So congratulations to writer Eddie Berganza for a change of pace one-off that acts as a bridge between the current unsuccessful Titans run and the upcoming unsuccessful run (the Titans will consist of murderers led by Deathstroke - oh yes, that has breakout success written all over it). The original DC solicitation for this issue promised we'd see Roy having a fever dream of a possible Titans future, but this Elseworlds tidbit will do.

And well done to fill-in artists Scott Clark and Ardian Syaf for making the Titans look close enough to their regular selves to echo our old friends, while adding subtle changes to details.

Check out, for example, the teenage Donna Troy's Wonder Girl costume, apparently created with body paint and strong liquor. While there are one or two awkward moments I enjoyed the art - presumably split by time period, with Syaf handling the current moments and Clark the past (apologies to both gents if I've gotten that wrong). Syaf does a brilliant job of rising to the script's more overwrought moments (Donna is apparently auditioning for Weeping Gorila Comics for much of the book) while Clark captures something of the atmosphere of the recent Teen Titans: Year One art of Karl Kerschl. Inkers Dave Beaty and Vicent Cifuentes do good work here too.

I like this subtle touch, as Donna and Roy talk.

Note the blur? Sure enough, a page later Kid Flash is present (and being a jerk again, warning Roy off Donna like a patronising big brother). Kudos to Hi-Fi Design for that, and indeed, a sterling job throughout the issue, from the spookily effective opening page onwards.

And there's some more than decent dialogue that makes it seem like these are the Titans I grew up with, for example the banter between Wally and Donna about the former's wife, Linda. But then something happens and I'm reminded that these are simply strangers, going through the motions.
Titans #23 review