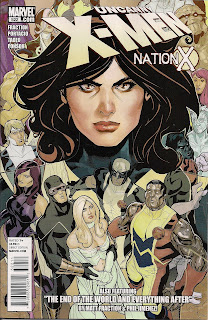 Kitty's coming home. That's the message of Terry and Rachel Dodson's pretty cover, and it persuaded me to buy. After all, Kitty Pryde has long been one of my favourites, from the day she was introduced as a gawky 13-year-old. She's grown a lot since then, and not just in the predictable ways of comic book anatomy.

No, Kitty went from wide-eyed teenager to superhero soldier, a warrior for mutantkind and eventual saviour of the planet. Tragically, saving the Earth from a massive alien bullet meant steering it away while keeping it phased out of solidity, preventing her from ever returning home. She wasn't dead, but she might as well be. Kitty Pryde was lost for all time.

But I'm not complaining, I'm celebrating. We get our girl back in an issue of Uncanny X-Men that brims with uncharacteristic optimism. Cyclops knows the dangers of the bullet's return but has faith in Magneto to stop it from devastating the planet - after all, if his foe-turned-ally can magnetically pull the bullet back from deep space he sure as heck can stop it from piercing the planet. Scott Summers also puts great faith in his scientific sub-team, the X-Club, and Emma Frost's Stepford Cuckoos to keep the planet from panicking. And he knows mistress of mutant medicine Dr Cecilia Reyes is their best shot at saving Magneto after the strain of rescuing Kitty.

And it pays off. Yes, Scott gets a lecture from Reed Richards for being, in his eyes, unnecessarily secretive, but Kitty's coming home. Hurrah!

Boo. Kitty's home and she can't unphase. This throws Scott and Colossus into a right old funk. 'What does this mean?' asks Peter Rasputin. Twice. And loudly.

What it means, dimwit, is that Kitty has been using all her will to stay phased for several months. If she's to have had any sleep the phasing would have had to become her default state. So of course she's not going to be able to snap right out of it. So calm down, and have a nice bowl of chicken soup ready for when Kitty can slurp again. It's just a phase she's going through.

Overwrought ending aside, I enjoyed this story, which showed that when the X-Men combine their wits and powers, superheroics with mad science, there's little they can't achieve. Magneto's cosmic level abilities are more than I'd expect, but it's not like he's wielding them with ease. And writer Matt Fraction found room in his fundamentally serious script for humour, notably in a scene set on the Blackbird. The Reed Richards cameo made perfect sense - of course a hero who's operated openly from day one wouldn't understand why being furtive is second nature to the X-Men.

It's years since I've seen any comics art by Whilce Portacio, but on this showing, I'm glad he's back. Maybe it's the smart inks of Ed Tadeo, but he looks to have improved since his Nineties heyday - the work's warmer, less scratchy. There's splendid colouring from Justin Ponser, too.

I confess to not understanding a silent page in which Emma Frost is piloting an undersea craft, as Namor swims alongside; and the equally quiet page opposite, which shows various X-Men at work and play, had me scratching my head. Presumably the latter was meant to show that life goes on and some people at least appreciate that Kitty being back planetside, and the bullet gone, is a pretty good start.

There's a second story here - Marvel says it's a 'bonus' in which case I expect my dollar is in the post, as this is a $3.99 issue. In it, an alien who hasn't lived the best life awaits the end of his world. I realised pretty quickly what the link was to the main story, which made waiting for something interesting to occur pretty tortuous. In the end, it was a decent, if unsurprising, little tale by Fraction, penciller Phil Jimenez and inker Andy Lanning, but I'm just not fussed about the mental meanderings of a character I've never seen previously and likely will never encounter again.

Still, I've no huge complaints about this issue - it's certainly a good
X-Men comic, being pretty much self-contained and having all participants acting in character (well, in the characters I prefer; a fair few have had several personalities over the years). I'd have preferred a longer main story, with more on Kitty, but the creative team gave me enough to hook me. I'll be back.
Uncanny X-Men #522 review Fraction Portacio Tadeo Ponsor Jimenez Lanning