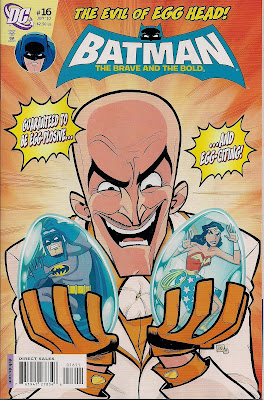 I wonder if the kids love this book as much as I do. With Batman, Wonder Woman, the original Teen Titans, Nocturna, Egg Head and a mystery villain, the colourful character count is high. With Landry Walker writing and Eric Jones drawing, the script is smart and the artwork vibrant. It's another romp around the DC Universe - Sixties as much as animated - at breakneck speed which introduces all the characters as we go along. The story has our heroes collecting mystic eggs, knowing they're serving the old Adam West villain's masterplan but aiming to crack the mystery before it's too late. While the plot's fun, it's even better to see how Batman and Wonder Woman bounce off one another.

Wonder Woman and the Amazons are well served here, as Batman's narration tells newcomers everything they need to know to enjoy the team-up (click to enlarge that thar image). And by the end of the issue they've been shown just how awesome Diana is. One splash page, in particular, shows the power of the heroine (and makes up for Batman's cheekily describing Diana as 'one of the most powerful women on the planet'; anyway, he obviously places her in the first rank of heroes).

Oh, and there ain't no kissing - these heroes are colleagues and friends, neither has been fantasising about the other. Phew!

I mentioned a mystery villain. You can probably guess who else would show up, given the characters involved. If not, buy the book and see his background and name tweaked a tad.

The only thing I wasn't delighted with was the Wonder Woman costume design. While I'm a big fan of the original eagle bodice and even have room in my heart for the old ballet slippers, Diana is saddled with an incredibly unattractive skirt and tiara-style girdle. Plus, her features are very angular and she's rather bony all round. While it wouldn't be appropriate to have a zoftig Diana in an all-ages book, there must be a middleground between Baywatch and Handsome Spinster. And it's not like Eric Jones doesn't draw cute, as readers of the wonderful Supergirl: Cosmic Adventures in the Eighth Grade (written by Landry Walker and available from all good booksellers pluggity plug - hey, I want to see a ninth grade sequel!) know.

Perhaps this is the look from the TV series bible, although I understand rights issues mean Diana has appeared only from the rear (stop it!). Never mind, I still loved seeing Wonder Woman fight alongside Batman, allowing some typically entertaining B&B moments. 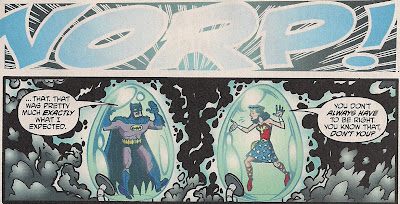 There's the promise of an arc storyline spinning out of this issue, but this Egg Head tale is self-contained. It's definitely worth shelling out for.
Batman: The Brave and the Bold #16 review Landry Walker Eric Jones