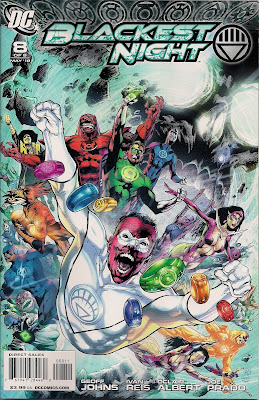 Phew. That was a busy comic. Black Hand, Nekron and the Anti-Monitor no longer a threat, a horde of dead heroes brought back to life, the revelation that macho pilot Hal Jordan quotes Latin poetry ... it's certainly a page turner. And also a page lifter, given the presence of a flappy foldout showing just who's alive again - Martian Manhunter, Aquaman, Hawk, Max Lord, Firestorm, Jade, Hawkman and Hawkgirlwoman (it's complicated), Captain Boomerang, Reverse-Flash and Deadman - presumably Aliveman now. And Oriris, but could anyone possibly care?

And not only are they alive, a few of them get costume tweaks - J'onn is back in Silver Age form but with boooring long pants and a more claspy clasp, Digger Harkness swaps his 'fly me, I'm a steward' cap for a woolly dut, Aquaman's belt is more blingy. Little things, but who knew the White Light Entity was a celestial Gok Wan? Fashion is life.

It's left a mystery in the story why this lot were chosen to live again while the likes of Elongated Man and wife Sue, who unlike Osiris, actually have fans, are still feeding the worms (though in the DCU that probably means Mr Mind). Aquaman's former partner Tempest, too, was only killed in this crossover so I fully expected him back - getting him breathing again could, I suppose, be a plot point in the Brightest Day series spinning off from this, which is set to feature Aquaman.

What is obvious is that the animating light is actually the DiDio Force - the will of DC Comics co-publisher Dan DiDio that DC characters are presented to the public in 'their most iconic representations'. And it helps if the characters are alive. Hence J'onn, Aquaman, Firestorm and co back as they were. None more so than Hawkgirl, who turns out not to be Kendra Saunders, but Hawkwoman, Shiera Hall ... but that's OK, as the pair had been a tangled mess of soul and personality for years; this week, it's redheaded Shiera, is all. And Carter has black hair once more. So, everything new is old again - physically at least. We'll have to wait and see how the other shoe of personality drops.

While I like my comics to move on, allow characters to grow and develop, I admit to being thrilled by the return of J'onn, Arthur, Ronnie etc, characters who never should have died in the first place, their deaths merely serving an event or a relaunch. Now that the events are over, the relaunches failed, it's time to give the icons another chance (Barry Allen, back since last year, is the exception here - he died magnificently and for a good reason, and his successor Wally West had made the role of the Flash his own; so far I'm not convinced turning this particular clock back was a good idea).

So I'm good with the resurrection shuffle, for the most part. It made for a thoroughly entertaining second half to Brightest Night #8. The first several pages were just more crowd scenes of Rainbow Lanterns blasting Nekron and his Not Zombies Honest! horde. There's one scene in which a few of the dead heroes become the new White Lantern Corps on a gorgeous spread but that lasts about as long as the Anti-Monitor's trimphant return, which merits just a single splash page; they're flashy moments in a fun comic but the very definition of sound and fury signifying nothing much.

The most puzzling page features the Indigo Tribe, back in their own realm and offering a typically compassionate hand to one of the issue's villains. 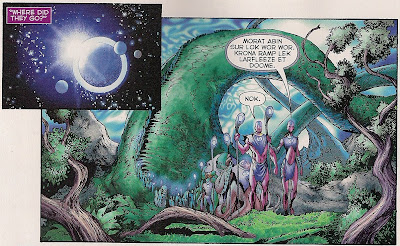 I don't doubt someone has a translation online but if something's worth saying, I'd like it in the comic, in English.

And the best page? It comes as we see heroes reunited with their formerly dead friends, enemies and lovers, and shows that while there's no denying they can bring home the big moments, writer Geoff Johns and penciller Ivan Reis truly excel in quieter, creepy sequences. 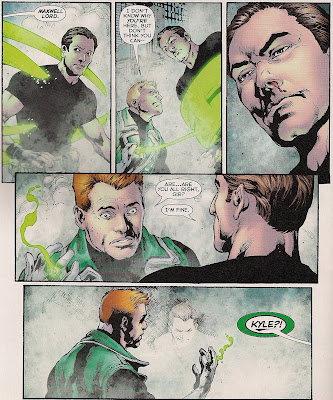 Credit to Johns for providing a decent ending to a story that's gone on for far too long. And a huge pat on the back to Reis for wrangling the cast of thousands through the book, keeping everyone in play and looking good. Inkers Oclair Albert and Joe Prado, too, more than merit their money, while Alex Sinclair must have earned his way into the colourists' Hall of Fame with this issue. Nick J Napolitano letters for drama, so deserves a nod too. Poor Steve Wands deserves a hug, as he has to letter a whole page of Indigo tripe representing Verse 7 of 'The Book of the Black: The Burned-in thoughts of William Hand' at story's end. It's Miss Othmar gone cosmic.

So it's over, so much as any superhero event is ever over at DC, which has taken its old 'there's no stopping us now!' slogan to heart over the last decade. The big picture never snaps fully into focus, it just goes on and on and on - neither characters nor readers get time to breathe, and nothing really matters as one status quo is quickly succeeded by another. So it is that this book closes with a checklist of two dozen comics we're meant to buy in order to behold the unweaving tapestry of the new DCU. Which seems to be the old DCU, but with a few different people alive and dead.