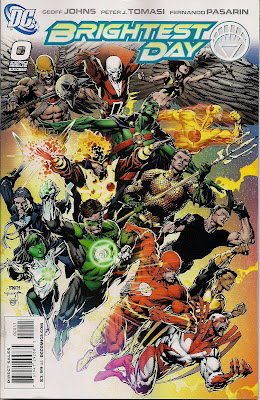 As well as space-wasting splash pages and characters yelling 'THE HELL?', one of the things guaranteed to get me moaning is a #0 issue. Usually it's simply a first issue by another number.

Not here though, as we join former Deadman Boston Brand on a journey across the DC Universe to check in with others who were recently resurrected. Brightest Day #0 justifies its serial number by providing an overview of the cast and a hint at the journey to come.

So after a bittersweet opening in which (and I know I tried it on for size in my Blackest Night #8 review, but I'm not calling him Aliveman) Boston destroys his gravestone, he's swept away by the white light of life to watch the other reborn heroes and villains.

There's Aquaman, reunited with wife Mera and, despite a night of nookie, fascinated by the shadow of his Blackest Night counterpart.

Professor Zoom, the Reverse-Flash, hangs around Iron Heights prison, apparently well out of it.

Elsewhere in the jail, the original Captain Boomerang, hints that he's maybe going to use his second chance to be a better man - though in a vaguely threatening way.

Hawkwoman Shiera Hall is acing a pop quiz on her past lives given by hubby Carter, who's being haunted by his former selves, before a souvenir of recent events carries them away on wings of mystery.

Max Lord kills himself again but makes sure he falls into, hmm, a Lazarus paddling pool?

Jade shows she's not one to get bogged down by soap as she makes her peace with former boyfriend Kyle Rayner, who's currently swanning around space with some alien popsy.

Osiris collects the petrified Isis and Black Adam as he pledges to make Kahndaq great.

Hawk tells Dove he's going to be a tad more proactive in terms of catching bad guys, but doesn't kill anyone.

And Boston himself has a vision of where the players' lives are going before the white energy he's been ferrying around in an Oan ring turns in its most impressive performance yet, bringing Star City back to life. It's not clear whether the citizens are alive once more - so far we see buildings and a spiffy park - but with luck there's more to it than urban regeneration and neat landscaping.

Oh, and there's a final page appearance of someone I'm sick and tired of, Banana Lantern Sinestro.

Brightest Day #0 is a blast, reintroducing old characters and immediately moving their stories on. The return of Star City, only weeks after its devastation in Cry For Justice, surprised and thrilled me. Because, why not? Its loss has done its job, setting Green Arrow and Roy Harper down new psychological paths that won't be cut off by the city's return (especially if it's empty of people, which seems likely; I can't see Roy's daughter Lian having been instantly resurrected like a packet of dried mash). And we've seen a hero lose an entire urban landscape previously, when Green Lantern's Coast City was wiped off the map. I've no idea how, as DC has said, Star City will become the most important place in the DCU, but finding out should be fun. Just as long as no one expects me to read any angsty Green Arrow or Arsenal solo books ...

There's nothing here to rant about: I wasn't keen on J'onn J'onzz ignoring the existence of Miss Martian in declaring himself the 'only Martian', but that's just scene-closing drama. I'm thoroughly sick of hearing characters say 'Flash fact' cos it makes no sense, unless they were reading Barry Allen feature pages in the Sixties.

But they're tiddling things. The characterisation from writers Geoff Johns and Peter Tomasi is rich, the individual stories intrigue and I care about what happens to these people. I'm not delighted by the obvious ongoing linking to Green Lantern mythology, but it's inevitable - answers are yet to be found as to why the 12 people reborn were chosen while others remained dead. Finding out should be a blast.

Especially if we keep getting artwork like this from Fernando Pasarin, who turns in a bravura performance. The action moments explode, the quieter scenes pull us in. Individual compositions shine while building up into pages of spot-on storytelling. There seems to be no area of the DCU we can't go with Pasarin as tour guide. Wonders never cease, he even made me love the spread reveal of Star City, and I tend to hate double-pagers bereft of people. With all this goodness, it's tough to choose a favourite moment, but I have to say Pasarin's Flash demonstrates that Barry Allen really is generating a ridiculous amount of power. 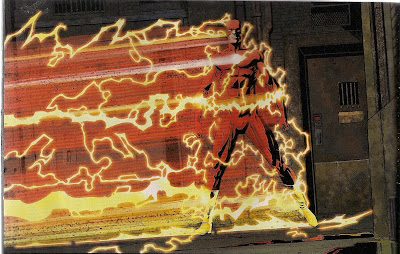 Looking like that, you wonder why the Rogues Gallery members bother getting out of bed (and yes, I realise I mentioned not liking 'Lightning Flash Barry' in my Flash #1 review, below - but, wow). Credit, too, to the battery on inkers and colourists who helped this issue shine, and Nick J Napolitano for lettering with flair.

The cover pencilled by David Finch is suitably splashy, he does a marvellous job of fitting in 14 characters without anyone getting short shrift, but I'd love to see Pasarin draw have a go at the lead image. Lord knows where he'd find the time, mind.

If the next 24 issues are as good as this first - zeroest? - then I'm delighted Brightest Day began with a nought, because it means one extra issue of superbly crafted superhero comics.
Brightest Day #0 review Geoff Johns Peter Tomasi Fernando Pasarin