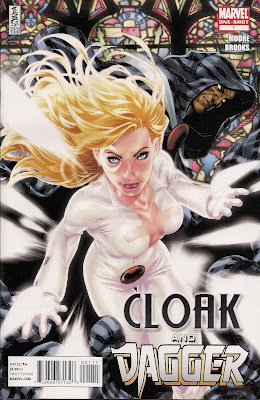 Cloak and Dagger are a study in contrasts: light/dark; female/male; white/black; rich/poor; covered/flashing ... goodness me, that Dagger girl really is flaunting it - outside of fan art I can't recall the shapely slits of her costume ever being quite so slitty (I said slitty). She's positively Emma Frosting, here. No wonder the Young X-Men can't beat her at the beginning of this one-shot, they're likely thoroughly distracted. Even gay Anole. 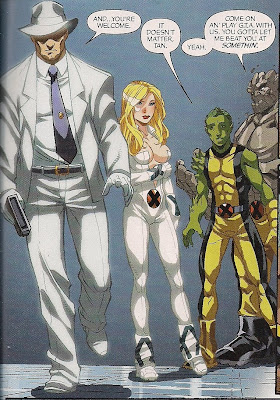 Funnily enough, though, as the issue goes on, it's Cloak who ends up baring the most flesh.

As 'The Broken Church' opens, Cloak and Dagger - Tandy and Tyrone - have hooked up with the X-Men on the godforsaken rockpile amusingly christened Utopia. Tandy's having a terrific time practising her powers/teasing pubescent boys; for once she feels at home, among her own kind - mutants. Then science guy Dr Nemesis throws a spanner in the light works by revealing that she's not actually a mutant.

Tyrone is having a good time of his own back in the old Boston hood, spending days with an old pal, Tia, who, sadly, turns out to have an agenda. She runs with a bunch of brainy bruisers who are the mutant equivalent of the ridiculous Ex-Gay movement; they aim to persuade him not to use his powers, for the benefit of mankind.

Happily, Cloak finds out Tyrone is in trouble and mounts a rescue. By story's end Cloak and Dagger have reconnected with one another, disconnected from the X-Men and resolved to strike out on their own. Well, Dagger has, and Cloak goes with her, because he relies on her light to keep him whole, and because on some level he loves Tandy. Before this story I'd have said they loved one another equally, but Tyrone certainly has a fine time with the gorgeous Tia, and admits to feeling guilty, so he's likely being a naughty boy in his mind. And Tandy's talk of the vows they made in the church they tend to slink about in - if memory serves, St Patrick's Cathedral in New York - conjures up the idea of a married couple.

I've been intrigued by Cloak and Dagger ever since Ed Hannigan drew them so strikingly in Spectacular Spider-Man. Their powers were perfect for the comics page, being intensely visual, and were pleasingly mysterious. I've not followed them through the Marvel Universe of the past few years, though, and seem to have missed some changes - in this issue Dagger doesn't throw a single dagger of light at anyone, she simply generates light blasts. And Cloak looks to have gained a very stylish starfield effect. Thank goodness he at least remembers his unique selling point, sucking a bad guy into a dark dimension with his cloak. Let's hope Tandy follows his example and remembers that she's Dagger, not Dazzler.

Other than the non-depiction of Dagger's daggers, and slightly too-revealing costume, I rather liked the pencils of Mark Brooks - he's superb at capturing the story's emotions, and draws an especially fine Cloak. 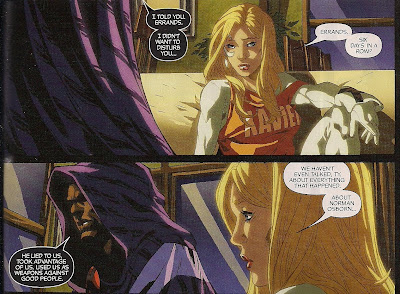 He's aided by the inks of Walden Wong and colours of Emily Warren, who ensure each scene has the proper mood. The art team also give great buildings, there's a rare texture to them - important for urban-centred characters such as Cloak and Dagger.

If the ex-mutant fellas return, though, they could do with a costume tweak, those uncomfortable chin pads give them a horrific Abe Lincoln tache-less beard aspect.

And a word about Mark's cover - wow!

Stuart Moore does a fine job presenting Dagger's state of mind - she's one of the few people in the Marvel Universe who wants to be a mutant, because it gives her somewhere to belong. Her sadness at learning she doesn't fit in after all is palpable. And while the X-Men don't actually tell her to bugger off and rejoin the rest of the flatliners, they don't give her the attention she needs at a tough time. But as the story unfolds, she finds her centre, and a new determination.

Cloak is a tougher sell altogether - in another of those built-in contrasts, where Tandy is the optimist, Tyrone is, frankly, a miserable git. This makes him harder to like, so it was good to see him having some fun for at least a page here.

It's just a shame that the nature of the story guarantees Cloak's in no fit state to get involved in much of the action, meaning we don't see how well he and Dagger combine their abilities and personalities. It's also disappointing that Dagger needs help from the
X-folk to rescue Cloak - I realise an X-Men tie-in helps sales, but they were present at the start of the book, by the end it should be simply the issue's stars - it's not like they get a comic of their own very often.

But, the story is intriguing and opens up some interesting areas for exploration and, best of all, Stuart puts to rest once and for all the idea that Cloak and Dagger are mutants. They're not, their origin is their origin - they were the victims of weird drug experiments and that's what supplied the powers. No x-gene was activated in the making of these heroes.

Which is how it should be - like Namor (also currently hanging out with the X-Men), they were tagged as mutants after the fact purely as a sales device. Circulation of their books didn't soar in either case, so there's no reason for any special x-association today. Which means Tyrone and Tandy can tear off the incongruous X-symbols they've been saddled with of late (let's just hope it doesn't create any new rips in Tandy's togs).

Now that Stuart has redefined and repositioned them, Cloak and Dagger are ready for some non-mutant misadventures. So I hope this promising special - heck, there's even well-placed humour in here - sells well enough to give them another one-shot, with both our pusher-punishing heroes front and centre, firing light daggers and absorbing evildoers. I've never been convinced they're series material - Cloak and Dagger are so sharply defined in character and mission that they've always seemed best as guest stars - but I'd happily be convinced otherwise.
Cloak and Dagger #1 review Moore Brooks Wong Warren