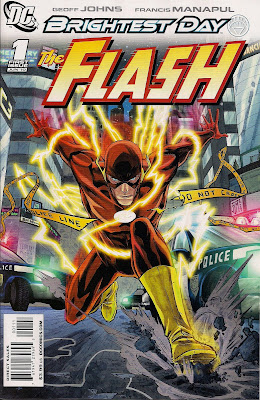 Barry Allen's back at work with the Central City Police Department, the Flash is patrolling the streets and there are some familiar, yet fresh, antagonists in town. It's fair to say that the first issue of this reborn book moves at a fair clip.

The opening pages, mind, make Barry look a bit rubbish, as he tells the kid Trickster to pull over in his tricked-up car. I really do think the Flash can outrace a bloomin' car! Oh well, the scene gives wife Iris a chance to be heroic, pushing a cyclist out of the way as the car mounts the pavement. It must be her coffee-charged reflexes, as she's here revealed to be addicted to caffeine.

The rest of the book sees Barry rejoining the crime lab and meeting colleagues new and old, and attending the body of some guy dressed in a Mirror Master suit. There's a bit of chitchat with reporter wife Iris, showing the professional boundaries Barry has around sharing information with the press, and a surprise ending that's very Silver Age.

While it would be fascinating to see Barry and Iris have a decent chat about their years apart, (literal) future children and the like, it makes sense to avoid this kind of baggage in a debut issue. And I'd not be surprised were writer Geoff Johns to avoid the ins and outs of the Allens' lives altogether, and just move forward. I'm certainly ready for the Flash to find his place in the DC Universe, and on the basis of this issue's script I'll enjoy doing so. Barry is presented as a happy bunny, ready to right wrongs that have piled up in his absence. Iris is ever the smart newshen, and a bit of a nag towards her always late hubby - I've no doubt that in time she'll be filled out a bit more but reestablishing her classic characteristics is a start.

And thank you Mr Johns for catching us up on Bazza's old lab partner, the magnificently monikered Patty Spivot, even if we don't see her. I bet she's back from her sojourn in Blue Valley before the year's out.

And I do hope we meet this 'sidekick stalker' person Iris mentions - maybe throw wee Irey West at him or her ...

Such a scene would certainly look good as drawn by Francis Manapul. One issue in and I want to live in his Central City, with two Jitters coffee shops on every block, tree-lined pavements, happy people. Criminal scumbags aside, it looks a great place. 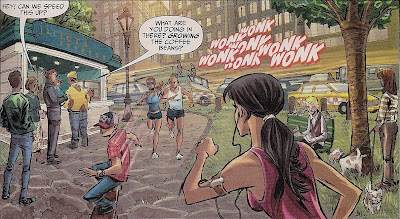 And Manapul produces a fine Flash, aided by the chromatic sculpting of Brian Buccellato. Their depiction of super-speed is very much their own, with Barry's after-images more jagged than in the past, producing an interesting jerky quality which makes more sense than the smooth transitions between poses of old. And while I'm not a huge fan of Barry being surrounded by electricity - that's more Wally West's thing - I love the way the speed-lines are presented. The supporting cast designs are interesting, and the expressive artwork brings them to life - I'm looking forward to spending time with the Central City cops, crooks and citizens.

Barry and Iris look a tad younger than perhaps they should, but with their history of time travel, rebirths, surgery and pre-owned bodies, who can truly say how they should appear? Manapul does give us a clever take on Barry's haircut - long enough to be modern, short enough to evoke the classic crew cut. Apart from a page showing the Rogues in panels spelling out WANTED, which doesn't quite come off, the layouts are happily straightforward, allowing us to be drawn into the story rather than be dazzled by design. And God bless Manapul, he gives us detail in the backgrounds and foregrounds, actually bothering to draw such things as the slats on Venetian blinds and enhancing the story immensely.

A nod, too, to Nick J Napolitano, whose lettering is filled with as much energy as any Flash book could ask.

By the end of the book Johns, Manapul and pals have reestablished Barry, Iris and Central City, set up a new career path for the police scientist and lined up a few mystery skittles. And as much as for the content, I'll be back next month for the tone - as with their recent Superboy run in Adventure Comics, Johns, Manapul and Buccellato have quickly found a sensibility that feels unique in the DC Universe, and right for the book.
The Flash #1 review Johns Manapul Buccellato Napolitano