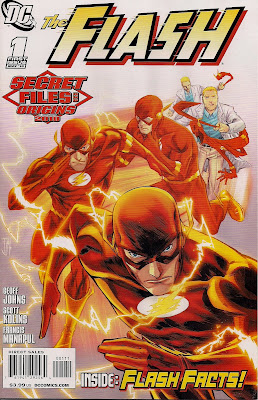 It's ironic that some of the momentum surrounding the return of Barry Allen has been lost due to the time it's taking to get his new series up and running. He showed up alive in Final Crisis in 2008; starred in a six-issue mini-series, Flash: Rebirth, that took almost a year to appear; had a three-issue Blackest Night mini; and now here's a Secret Files and Origins special heralding the start of his new series, finally, later this month.

As an old Barry fan I've been itching to see what stories Geoff Johns will give us justifying his return, what with the Silver Age Flash having died a great death a generation ago, and protege Wally having made the role of the Flash his own. Perhaps this mix of strips and profile pages will begin to satisfy my long-whetted appetite ...

The cover by incoming artist Francis Manapul is attractive, and there's more from him inside as he shares the pages with Wally West's number one illustrator, Scott Kolins. The first strip, with art by Kolins and colourist Michael Atiyeh, reminds us that time passes very slowly when you have super-speed, leading to extended moments staring at the clock - an obvious point made again an again in Flash stories. There's also more of Barry being haunted by the recently revealed/retconned murder of his mother by Professor Zoom, as seen in Flash: Rebirth. We note that the home where, the authorities believed, Henry Allen murdered wife Norah is today a wreck, Central City's equivalent to Gotham's Crime Alley, and a place of pilgrimage for Barry.

The only truly intriguing information here is that when Barry itches, the rest of the Flash Family aka the (ugh) Speed Force - six super-speedsters - turn up to scratch it. It seems that now Barry is nominated Father of the Speed Force he has a link to Wally, Jay, Irey, Max, Bart and Jesse, meaning that when he's worried, they're worried. It's not made clear whether or not this is one-way traffic; let's hope so, or they'll forever be showing up at one another's side in moments of excitement, which could prove embarrassing.

Honestly, it's bad enough that the literal-rather than-familial Speed Force, rather than being a cosmic field all Flashes could somehow tap into, has been over-explained as Barry-generated energy, continually looping into past and future so as to explain the presence of Flashes before and after him. There's no reasonable reason for this - both Max Mercury and Wally West have been shown to understand more about the Speed Force than Barry - other than that Barry Allen is the currently favoured Flash. And now it seems Barry has low-level telepathic tentacles caressing his peers and relatives at all times ... when Barry needs a hug, six speedsters show up to provide it. Some people may not find that a little creepy.

Original Flash Jay is the first to show up, letting us see that in his mental dictionary a lightning bolt is more than a simple flash of electricity.

Can't say I get that one, but Jay's a scientist so of course I believe him.

The story closes with the Rogues together (they're beginning to look seriously co-dependent) for a clever gag that acts a prelude to the upcoming Flash #1.

Kolins' art has rarely looked better - clean, moody, well-composed - and it'll be a crying shame if he doesn't get to draw Wally again. A dream sequence of the boy Barry, perhaps an attempt to connect younger readers with the middle-aged hero, is especially effective (hopefully the obvious kid clothing nod to Barry's uniform was the product of Barry's subconscious, rather than Smallville corn). It's commendable that you can always see that this is Barry in the mask, not Wally. It's just a shame such a talented artist wasn't given anything fresh to draw.

The rest of the book is equally underwhelming. There are recaps of various Rogues' histories and abilities; paragraphs on Barry's crime lab colleagues (bring back the wonderfully named Patty Spivot!); an understandable glossing over of Iris Allen's messy background as a 30th century refugee and body transplant pioneer; a hint that a very dull speedster is returning (because there aren't enough of them in Barry's life); a very obvious likely path for Wally's speed-free son Jai which I hope is a red herring (he should lose the super-villain-in-training tee shirt, for a start); and the claim that time travel control device the Cosmic Treadmill's design had been transmitted to Barry's mind from points unknown - something I hope won't be followed up on as that way lies madness, and Mopee.

My favourite secret file entry compares and contrasts the twin cities of Central and Keystone, one bright and shiny, the other trying to regain its glory days. It didn't half make me realise how much I miss Johns writing, and Kolins drawing, the adventures of Wally and Linda West in their blue collar burg.

The art on all the feature pages - some co-written by Sterling Gates - is usually solid, often terrific, with the villains looking formidable and the flashbacked Allens charming. The one real exception is the profile of Mirror Master, in which a spot of dramatic foreshortening by Kolins doesn't quite come off. But well done to him for at least trying something different - I can't bear the Marvel Handbook style of character posing, with everyone looking stiff and dull.

Atiyeh colours the Kolins pieces, while old Adventure Comics partner Brian Buccellato is back with Manapul to good effect. What I would like to have seen is some proper comic book lettering on the profile pages - while mechanical fonts might seem logical for character profiles, they don't half pour cold water on the artwork.

This comic is, basically, nice but dull. I can't say it's bad as it's well-written and drawn and succeeds in illustrating the current state of the Flash's world, even giving one or two nods towards things to come. But it would have been nice were readers who have been reading Flash stories for awhile rewarded with a short strip in which something innovative happened, perhaps, or a brand new character was introduced. As is, I'd recommend Secret Files and Origins to new readers confused by the cast of Flash: Rebirth, but longtime fans should simply flick through their back issues while waiting for the long appetiser to be superceded by, I hope, a tasty meal.
Flash Secret Files and Origins 2010 review