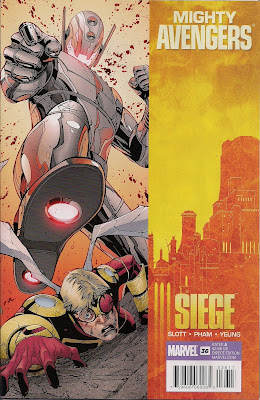 And after three years the Mighty Avengers comes to an end. Not with a whimper, but a bang, as the don't-call-him-winsome Wasp, Jocasta and Blackjack take on Ultron and his infinite army of Jocastas. Regular readers of the book won't be surprised that Waspish Hank has a few tricks to pull out of thin air - hey, he's Earth's Scientist Supreme. It's not predictability, it's consistency; this is how Pym is these days, MA writer Dan Slott having rebuilt his personality and spirit over the last couple of years.

So when Hank uses Ultron's daddy issues against him, it makes sense. When he reveals the true nature of Infinite Avengers Mansion, you admire his ambition and intellect. It's safe to say that Hank is the standout character of this series, though Jocasta makes a late play for Avengers Legend status in a wonderfully hoo-rah moment.

There are a few pages given over to Stature, USAgent, Vision and Amadeus Cho at the siege of Asgard. Quicksilver appears for a panel or two. And I couldn't give a hoot, it's all just serving another book. The story I care about is back with Hank and chums, as my prediction for what would happen this issue proves rubbish and the series ends, in Shakespearean comedy style, with a marriage. And said marriage is something we've never seen the like of, a little unnerving but mostly amusing, and it's going to serve future Avengers stories rather well.

But sadly, not future Mighty Avengers stories as the book is being shuffled aside while the Avengers franchise shifts again. Dammit! Slott has made this Marvel's most entertaining team book in years, full of wit, intelligence and, of course, action. The glory days of the Avengers were under Roy Thomas, and this comic has proved the torch bearer for that run's legacy, mixing team history, character dynamics and Slott's original thinking (he may well be Earth's Scribe Supreme) to make modern magic.

Slott's partner in greatness is Koi Pham, whose pages are looking sharper than ever, aided by the inks of Craig Yeung and Dave Meikis. There are several money shots, both in terms of action and emotion, but nothing is over-sold.

Extra points to Pham for pulling off a wee homage: 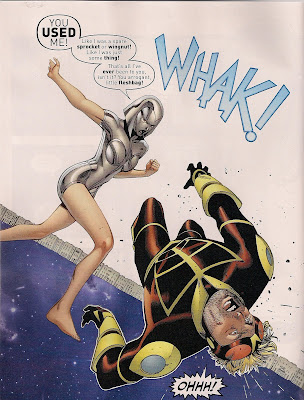 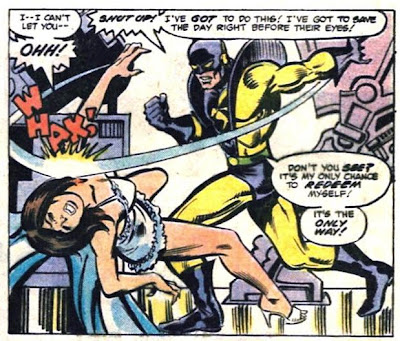 Whak! indeed. With one evocative image, Slott and Pham have pseudo-Jan Jocasta return a blow that went down in comics history. Hopefully the scene writes a full stop to a moment in Hank's story which, wrongly (the guy was having a breakdown), came to define him for a generation.

So, congrats to all the creative crew - mustn't forget letterer Dave Lanphear, colourist John Rauch, production, editorial - for a wonderful run. If only Marvel appreciated this book as much as some of us did.
Mighty Avengers #36 review Slott Pham Yeung Meikis Rauch Lanphear