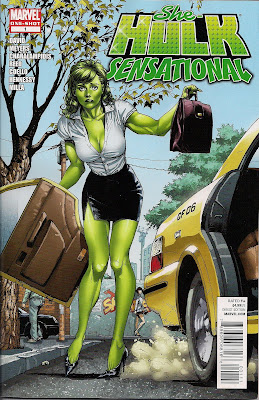 It's the 30th anniversary of She-Hulk's first publication and while she doesn't have an ongoing to celebrate the fact, Marvel have been generous enough to provide a one-shot.

I wouldn't have bothered, what with most of this $4.99 publication being irrelevant or reheated. First off, Gary Frank's cover, coloured by Emily Warren, is a beaut. It's a bit of a strange choice for a celebration issue, mind, with our heroine looking distinctly down at heel - the taxi number/signature, GF06, hints that what we have here is actually a four-year-old unused cover, from the time Jen was sacked from her law firm. What a fantastic birthday gift.

I suppose at a pinch the art could go with Peter David's opening story, the sole part of the book that's relevant to Shulkie's anniversary. It looks back to the days of John Byrne's Sensational She-Hulk with lots of fourth wall-breaking fun as the jade giantess gets the blues over having been around three decades. Luckily her creator, Stan Lee himself, is on hand to send her on a familiar journey in 'The She-Hulk Story That's a Riff on A Christmas Carol'.


And while the jumping off point is Ebenezer Scrooge's, the story is pure Jen Walters, with She-Hulk equal parts bemused and bristling as she meets her personal ghosts. It's fast-paced, fun-filled, Shulkie shenanigans and just right for the occasion. 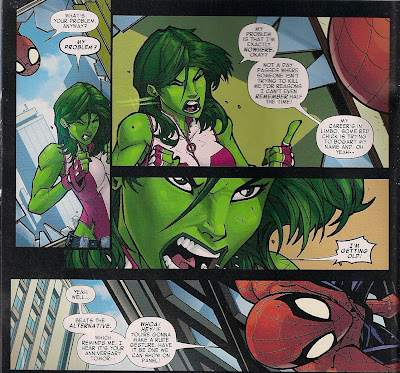 The opening page alone, starring Jen's answer machine, is a hoot. David even makes a few fair points about how far the character has come over the years. The art by illustrator Jonboy Meyers and colourist Jim Charalampidis, is bombastic and vibrant, perfectly suiting proceedings.
Marvel were ahead, and they should have quit. For the next story doesn't just reek of inventory, it admits as much with a first panel 'Skrull Queen's' note telling us the story takes place before Secret Invasion. That in itself wouldn't make the strip annoying, but as you plough through it and realise it's not a She-Hulk piece at all, but a 'one-size fits all' entry co-starring Spider-Woman and Ms Marvel ... that's annoying.

Of course, were it a great done-in-one, the day could perhaps be saved. It's not. Brian Reed's script presents the three women as so irritatingly stupid you realise why the story's sat around for a couple of years. And if this is set before Secret Invasion, presumably the Spider-Woman here is the disguised Skrull Queen, yet her thoughts aren't those of an evil spider-mole. Maybe this is a plot point covered elsewhere, perhaps she's in such deep cover she thinks she is Jessica. I dunno, and I shouldn't be expected to know in what's presented as a special tale of She-Hulk.

Oh, and can we have a moritorium on female team-ups called 'Ladies' Night'?

I like the artwork by Iban Coello and Andrew Hennessy, it's pleasantly powerful, with the senseless catfights presented effectively, but I'd rather it were in the service of a good script - and Reed can provide them.


Finally, a reprint of John Byrne's Sensational #40, not one of his better issues in terms of story, and it doesn't help for our purposes that it's part one of ... I dunno, I'd bailed on the title because the quality wasn't great. Plus, it's from the period when Byrne had dispensed with inkers and letterers, meaning the look isn't classic Byrne - too loose - and the lettering is a mess at times.
So, one lovely story, one less-good tale and an unsatisfying reprint. Shabby Birthday, She-Hulk.
PS Mart here - Just wondering why this review does so well in the stats - where is everyone coming from? Please feel free to add a comment and let me know!
Andrew Hennessy Brian Reed Emily Warren Gary Frank Iban Coello Jim Charalampidis Jonboy Meyers Peter David She-Hulk Sensational #1 review