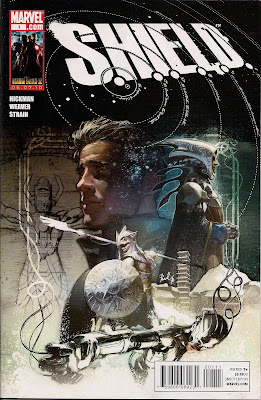 High concept, low expectations about sums up my attitude to this series prior to reading this first issue. I'd not been able to get into writer Jonathan Hickman's Secret Warriors, featuring S.H.I.E.L.D. mainstay Nick Fury, so thought a story focused on the organisation's heritage might not be for me. But recent issues of Fantastic Four have showcased Hickman's wide-ranging imagination in terms of expanding the Marvel Universe geographically, so perhaps I shouldn't be too surprised he can do the same thing historically.

So yes, I do believe that Leonardo da Vinci can fly. That he, Galileo and other great thinkers joined a planet-wide protection agency set up after ancient Egyptian engineer and warrior Imhotep routed a familiar race of MU extraterrestrials. It's not only cool to see da Vinci as a Renaissance Reed Richards - a Senor Fantastic, if you like - it makes perfect sense for the story. Of course the likes of Galactus would have visited Earth over the centuries, it would be nutty to think attacks on Earth began only with the age of Atlas but have occurred almost weekly since then.

The scenes from distant history are framed within a 1950s sequence showing an unusual young man being recruited by (he said, dropping the annoying-to-type dots) SHIELD to help save the world. Suffice to say, he has an unusual father too.

The snippets from the past are hugely enjoyable but the mystery of what's going on in the present day of the story is equally engrossing. I can't wait to see what the big picture is here, and how this da Vinci-coded SHIELD connects to the modern version beyond name, symbol and honourable intentions. And the motto which gives the SHIELD folk confidence to take on any threat, no matter how big, is something I'm itching to see explained. Based on this first script I've faith that Hickman will make it good.

I'm also sure that artists Dustin Weaver and Christina Strain will combine with Hickman to make it great. They certainly hit that standard this month with page after page of fascinating people, cities and machines. Weaver's illustrations are, to use the cliche with utmost sincerity, cinematic. The spreads and splashes are mind-boggling, the close-ups and reveals filled with intimacy and information. There's some tremendous design work gone into this issue, with such things as Shield's Rome base and the High Council's armour, whose helmets are apparently based on their first enemy (I wouldn't be surprised if the artistic Mr Hickman had a hand in things).

And Strain ensures that we immediately know we're shifting from past to present and back again via her intelligent colour palette (sounds like a SHIELD device, that). The Fifties get rich, deep colours, the past is filled with sunshine tones, a sequencing underlined when the narrative has the original shield 'travel through time'. And for an extra touch of class, Todd Klein lends his lettering to the operation and Gerald Parel teams with Weaver for that movie-poster-in-waiting of a cover.

I mentioned spreads. There's one in here that could well prove my favourite Marvel image by year's end. It's bombastic, busy and a real statement that the creative team knows what they're doing. I could describe it. I couldn't do it justice. Even if you're not buying this issue, do yourself a favour and take a cheeky flick in the comic book shop. Then you'll buy it.

There are a couple of bonus pages at the back illuminating one of the characters, but it was over my dumb old head. No matter, they were very much bonus pages, with the story coming in at 34pp.

I'll be back next month to enjoy this title in which, refreshingly, the ideas are as important as the action. One way or another, Hickman and friends are making comics history.
S.H.I.E.L.D. #1 review Hickman Weaver Strain Klein