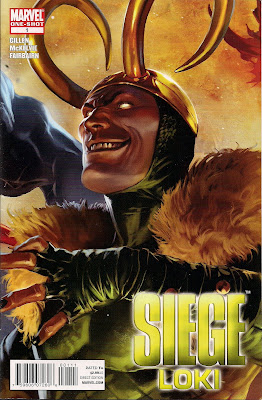 Led off by a magnificent cover from Marko Djurdjevic, Thor's trickster brother features in his own one-shot, bargaining with immortals to create mischief and mayhem. That's Mephisto, ruler of the Underworld, and Hela, former ruler of the Underworld (Norse division). By the end of the issue new maps of hell have been drawn and Loki departs to rejoin the Siege crossover.

This is an enjoyable flight of fancy from writer Kieron Gillen and artist Jamie McKelvie. Loki is the consummate plotter, inviting all to come close and hear what he has to say, but ever unknowable. He's less the master manipulator here in the other realms than when venturing into the world of men. For Gillen, smartly, doesn't show Loki attempting to put one over on his fellow deities. All three are gamesplayers, masters of the fine-print bargain, on equal terms when it comes to oneupgodship. They can help one another, satisfying their individual motives, but they know where they stand ... never too close.

Gillen captures Loki's massive self-regard without making him a boastful buffoon; he's confident in his sorcery and wiles, as well he might be after untold millennia of being both the tormentor and tormented of the Asgardian pantheon. He's also pretty handy with a whip and sword, we learn here, as he routs the Dinir, a group of ancient goddesses. Who knew?

Mephisto and Hela are also on good form, the former fuelled by boredom, the latter by fire to launch a new Hel. And super-sallow Hela gets the best line of the book as she exits to mark out her new territory.

The exit in question looks terrific as drawn by McKelvie, as if she's being erased from the dimensional plane by a giant rubber (UK meaning, if you please!). And while I love Hela's traditional Jack Kirby outfit, she looks marvellous in a flowing shroud dress, an elegant, ethereal envoy of death as seductive as she is terrifying.

Mephisto could do with looking a tad scarier - he comes across like a minor Shakespearean actor in red make-up and fright wig - but it could be that he saves the physical histrionics for the mortal types. And Loki? Perfect, as angelic of face as he is black of heart, never sneering like a pantomime villain. And in a clever touch, Gillen and McKelvie occasionally have him looking off the page, as if he's making the reader a co-conspirator.

The page showing Loki battling the Disir is imaginatively designed. Perhaps because we're seeing new facets of Loki, tiny panels combine to present a jewel effect (or perhaps McKelvie simply thought it'd look nice, which works for me). While a collection of small panels usually speeds up a fight scene, this design lends a calm to proceedings. It's fascinating to look at and, like the whole book, is coloured with pizzazz by Nathan Fairbairn. And Joe Caramagna's lettering throughout matches the characters perfectly.

The Disir look like ghosts made from bone, with a Mike Allred quality to their faces; I believe this is their first appearance in the Marvel Universe and given the combination of mythical background and spooky look, I hope they appear again.

Overall, this is a splendid example of a crossover comic that's good, but thoroughly missable so far as the main event goes. While plot points here apparently feed into Loki's plan to use Norman Osborn as a tool against Earth's heroes, miss this and you won't be at a loss so far as the Siege mini is concerned. That doesn't mean it's not a valuable focus on Loki.

And where this book is important is in showing that Gillen and McKelvie - creators of Phonogram - can play well within the Marvel Universe. It'd be wonderful to see what mischief they could create were they given their own corner, unshackled from a crossover. Go on Marvel, you know Loki would want it.
Siege: Loki #1 review Gillen McKelvie Fairbairn Caramagna Djurdjevic