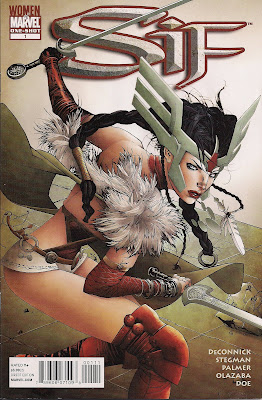 As a little kid reading Thor reprints in UK Marvel Comics, I resented Sif for coming along and kicking Jane Foster out of the strip. Over the years though, I came to like the character - for one thing, Jack Kirby's design made her fun to look at; for another, her fighting spirit made her Thor's equal. She's been in and out of Thor's comic over the years and is currently in, though according to the recap at the start of this one-shot, she's a mortal at the moment.

Not that you'd know it, as apart from a scene in which she assesses her scars and pains, the lack of an Asgardian body makes no apparent difference to her fighting prowess. Horse-faced, stupidly-named Beta Ray Bill shows up in the pub where Sif's drowning her sorrows - we're not told why she isn't hanging out with her fellows in Asgard, despite being on their doorstep in Broxton, Oklahoma - looking for help. His equally stupidly named ship, Skuttlebutt, has been possessed by space conquerors and Bill and some stupidly named bald chick can't get in to help. But Sif can, so she does and she beats the baddies. The end.

Well, that's not quite it, with the story also involving Sif's being a Gloomy Gladys, but as I bailed on the JMS Thor, I'm not sure why. I suspect she's feeling her age. We are reminded that Loki wore her flesh and made her a dying cancer patient for awhile, but hey, this is the Marvel Universe, there has to be a support group. By issue's end she's talking tough, having apparently decided to re-embrace her godhood, though being mortal might make that a problem. Then again, Bill does refer to her 'Asgardian biology' and Sif seeming stronger than previously, but I dunno.

I do know that this is a thoroughly missable comic, seemingly motivated more by Marvel's current promotion of female characters than there being any need for a Sif-centred spin-off. If she was de-godded in Thor, that's where she should be re-godded (if that is indeed what happened here).

Writer Kelly Sue DeConnick does a decent job with the script, though it's a shame Sif is such a downer here - other than Hogun the Grim, Asgardians should be larger than life figures who are never happier than when on a foe-filled quest. Beta Ray Bill and his girlfriend are pretty pointless, being there as story set-up rather than an essential part of it. Once the story gets going DeConnick does offer up some lively dialogue (eg Sif after being warned of a space plague: 'I am an Asgardian. I will not be cowed by the sniffles'), so I'll be watching to see what she does next.

Ryan Stegman's art is suitably big and brash, nicely expressive and the scenes of a fighting mad Sif are when the book really comes to life. The inking is inconsistent, with the legendary Tom Palmer being assisted by Victor Olazaba, but it gets the job done.

Travel Foreman and June Chung provide an attractive cover design but for God's sake, the Lady Sif does not fight base villainy in her knickers. Grow up, Marvel!

Overall, this is a passable time-passer, but rather than make me want to see more Sif solo tales, it had me remembering how much I enjoyed her previous turn as a mortal, in the Nineties Journey Into Mystery revival, the Lost Gods. Maybe, like Sif, I'm just too darn old ...
Sif #1 review