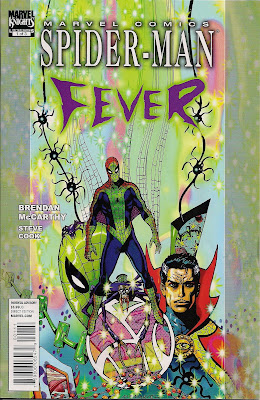 Spider-Man meets black whimsy in this story written and illustrated by Brendan McCarthy or, as he playfully styles himself here, 'McMarvel'. A mystical tome* Dr Stephen Strange purchases by mail order (ha!) turns out to be linked to extra-dimensional spider-demons and when one breaks through into the Marvel Universe it's thrilled to come across Spider-Man; a tasty dish to set before the king. Can Dr Strange set things right or will Peter Parker's soul be consumed?

That's the simple premise of this first issue of three but it's not the point. The point is to give classic 2000AD creator McCarthy a chance to go wild in the Marvel playpen. There's a distinct Steve Ditko influence at times in the areas of figurework and netherealms, inevitable for any artist working with his most famous Marvel co-creations, but Fever is pretty much pure McCarthy. The storytelling, the sensibility, the sheer weirdness of even the scenes set on Earth before all hell breaks loose ... it's McCarthy all over. Never has the Vulture looked so creepy, Nosferatu with green wings, while modern tower blocks are covered in cobwebs and grime. 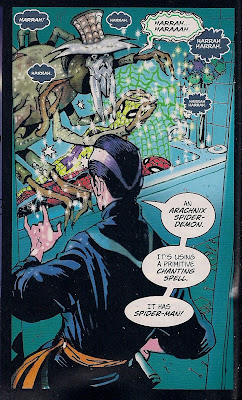 And once the Arachnix turns up, in a wonderfully appropriate manner, things just keep getting weirder. The demon may visually recall cuddly anthropomorphic spiders from children's books but the relentless chanting, the demands for Peter's soul . . .. brrr, I can see why, despite there being no 'bad language' or nudity in this book, it has a parental advisory - the twisted spin on child-friendly imagery could prove disturbing to, well, me.

For regular Spider-Man readers the implied mystical connection between Spidey and the Arachnix may recall J Michael Straczynski's 'spider-totem' spin on Peter Parker's superheroic origins. That concept was presented to Spidey as a revelation, and to me it felt like over-explanation. And terribly icky. Here, though. we have a dazed Spidey in a trippy realm with Dr Strange the likely cavalry, making the nuttier notion easily dismissed as they're aired, and therefore palatable.

From the delightful cover via the striking title page and on through the book, this comic is a feast for jaded eyes. McCarthy, partnered with Steve Cook, also produces the special effects and lettering - gloriously appropriate lettering - to ensure a unified visual look. And let's not forget the script, which gets us from A to B nicely, throwing in darkly amusing flourishes among the way.

In one of those rare weeks in which there's no Amazing Spider-Man, it's great that editors Stephen Wacker and Tom Brennan have given us something with the Spidey flavour, but a decidedly different aftertaste.

* I refuse to refer to bound reading material in a Dr Strange story as anything other than a tome.
Spider-Man: Fever #1 review McCarthy Cook Wacker Brennan