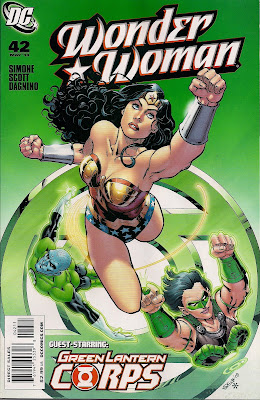 It's alien invasion time on DC Earth ... actually, that's not quite right, it's alien feeding time as a shipful of space scavengers prepare to unleash some predatory little buggers on the citizenry.

Before that, though, there's a scene establishing the nature of the threat, via a visit with members of the Green Lanterns Corps. At six pages, it's longer than I'd prefer - heaven knows we see enough of the old emerald warriors across the DC line these days - but it gives them a reason to star on Nicola Scott's beaut of a cover and hopefully pull in a few extra readers. And one of the GLs, Khund kid Kho Kharhi, did debut in this comic, so likely her connection to Wonder Woman will come into play next month.

I can't imagine any visiting fans of Geoff Johns' GL run being disappointed with the Corps' presentation here as there's plenty of the militaristic chat that characterises the force these days. And a grisly death, of course, though like another unfortunate exit later in the issue, it's subtly presented.

Down on Earth we join Diana chatting to Steve Trevor about the fact Genocide - who tortured his wife, Etta Candy - is still out there somewhere and he's rightly slightly perturbed that Diana hasn't made locating the beast her priority. Oddly, this scene seems to take place immediately after Genocide blew up the Department of Metahuman Activities building - Diana is helping with the clear-up - nearly a year ago in publishing time. This wouldn't normally bother me but Diana's had a few in-continuity adventures since then. I suppose the adventures with Black Canary in the Far East, the Olympian on Paradise Island and Power Girl in Washington itself could have spanned just a week ...

OK, I've rationalised that away, so I'm free to say I loved 'Wrath of the Silver Serpent'. The chat with Steve, an intriguing silent moment between him and Etta, Diana's easy confidence as aliens attack and the revelation of the leader's identity. This last won't be a massive surprise to old-time readers - the story is a spin on the Empress of the Silver Snake sequence from the Seventies - but it's different enough to be worthwhile. And who knows where things will go from here.

Writer Gail Simone gets a tiny demerit for the reuse of a gag about hospital robes, but major credit for Diana's narrative, which strikes a pleasing balance of seriousness and whimsy. 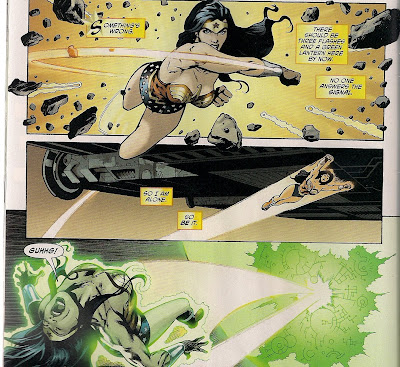 There's a nostalgic moment that warmed the cockles of my heart as Diana pushes Steve out of danger, a possible reference to the Groovy Diana Prince days and a wonderfully Golden Age demand from the alien leader. It's Gail nodding to Diana's various interpretations while still presenting the heroine she's made her own, a compassionate, wise warrior for the 21st century.

And as depicted by penciller Fernando Dagnino (fast becoming the MVP of DC's artistic pinch-hitters), she looks great too, whether in conversation or 'welcoming' the attacking extraterrestrials with a mighty left hook. Nicola Scott pencils the GL sequences and while Kho Kharhi looks a little slim for her race - previously she was something of an Etta Khundy - there's drama in them thar lines. Plus, Nicola and regular inker Doug Hazlewood bring on the cutest ickle aliens you'll see eaten this month. The intriguingly named Bit inks Fernando, and does an equally fine job, particularly in a scene set at the White House - check out the brilliant rendering of the villainess's face.

This is the Wonder Woman comic at its best, with a heroine to cheer for, villains to boo, supporting characters to love and a grabber of an ending. It's typical that I'm enjoying this book more than I have in ages just as a new creative team is due, but that's comics.
Wonder Woman #42 review Simone Dagnino Scott Hazlewood Bit