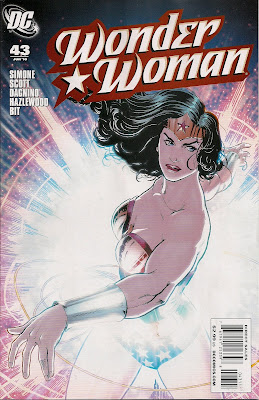 Goodness, what big arms you have, Diana. Mind, it's partly a question of perspective, as Nicola Scott gives us her spin on the Wonder Spin. While I prefer issue-specific covers, there's no denying this is an attractive image, and if it shifts a few extra copies, terrific.

Inside, Scott shares the pencilling with Fernando Dagnino as Diana battles the forces of Astarte, planetary conqueror, failed aunt and disappointed gourmand. It turns out she's not actually keen on eating a 'porridge' of mashed-up aliens whenever the Citizenry reaches a new planet; she only signed up to spare her little sister, Hippolyte, from being taken. And wouldn't you know it, the future Wonder Queen was too young to appreciate it and may not even remember Astarte exists.

So you can understand why Diana's auntie is rather bitter, she's had 3,000 years to mull over her fate; still, that doesn't make chowing down on the people of Earth OK, and Diana intends to get that message across. Wonder Woman is on fearsome form, razing Astarte's femme force, confronting her with the power of the lasso and finally coming up with a way to send the invaders packing - a good old duel. And she'll be fighting her previously unimagined anagrammatical cousin, Theana, to the death. I've had family gatherings like that ...

Elsewhere this issue we have a revised origin for Diana's costume elements, including a hint at why she wound up wearing a bathing suit rather than Greek warrior garb, in a marvellously moody flashback; the return of the DMA agents, here allied with the Gorilla Knights; a surprisingly effective Achilles (when can I have a plush of his two-trunked elephant, Mysia? Does it have to show up in Tiny Titans first, or something?).

It's another fun issue, full of believable characters and dialogue, as Gail Simone winds down her writing stint on this book. Steve Trevor and Etta Candy are in fine fettle, while the long-unseen Io is revealed to have been the creator of Diana's breastplate (no wonder she developed a crush what with all those hours in the foundry, contemplating the Wonder Bosom). There's good use made of both lasso and tiara, and the promise of fighter pilot Steve raining justice down on Astarte from the skies next time out.

The artwork by Scott and Dagnino - aided by four inkers - conveys the chaos as the humongous Silver Serpent attacks Washington DC, and shows what a formidable fighter Diana is in graceful sequences. Even daft old Achilles has a certain galumphing charm here. But the best scene, visually, is the flashback to Hippolyte in her palace - sad but serenely proud as an unseen Diana readies to leave Paradise Island for the first time.

The story concludes next month and I expect it'll be a corker as Simone says her goodbye to Diana. For now, anyway. Like Hippolyte, she won't let a departure end a great relationship ...
Wonder Woman #43 review