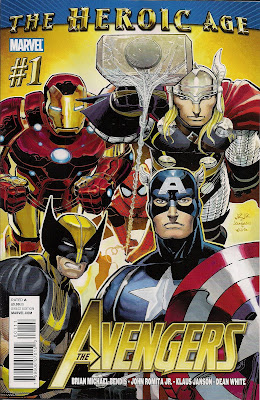 Wow. This comic really does lack the 'wow!' factor. It's positioned as the beginning of a bold new age for the Marvel Universe, the Heroic Age, but it feels like just another Brian Bendis Avengers book. Admitedly, the stakes are higher than has often been the case, as Kang the Conqueror warns of a threat to the future. And there are no ninjas (unless there are, but they're actually competent ones who can't be seen), but other than that its endless chatter between heroes, very much a case of 'where we came in' for anyone who read Bendis' debut story, Avengers Disassembled, six years ago.

That's not to say it isn't entertaining. I like banter, and God knows it's good to see Clint Barton as a happy Hawkeye, the Beast back in the throng and the Avengers recognised as a force for good. But Spider-Man still seems weird among the Avengers, and slash-happy Wolverine doesn't fit my idea of a shining hero. And after Dan Slott's thorough rehabilitation of founding Avenger Hank Pym in Mighty Avengers it'd be nice if the new Wasp had more than one, rather pathetic, line.

But it seems Avengers Academy will be his home title, with this one hosting Iron Man, Thor, Wolverine, Spider-Man and Woman, Hawkeye, Captain Bucky and A.N.Other. Wonder Man is also offered a place but turns Earth's 'top cop' (I'm sick of that already) Steve Rogers down, having a surprising, but interesting, perspective on the last few years. Former S.H.I.E.L.D. director Maria Hill is given the job of running the team, and as she never fails to bore, that's a few demerits. But Kang was nicely portrayed and I laughed at the Avengers segways - ooh, sexy!

John Romita Jr's cover is horrendous - did you even spot Spidey hiding in the middle? - but the art's a mite better inside, the main weak spot being Thor. It seems Romita is trying to honour Olivier Coipel's wide-browed Norse god, and it just doesn't suit his style. As Coipel has been drawing the same character created by Kirby, and drawn by Romita himself, I say he should relax and go his own way.

Not that I think Romita is the best fit for the Avengers. I've always been a fan of Romita teamed with inker Klaus Janson, on Marvel's grit operas, but on this showing, they don't suit a shiny team book. The work looks uncomfortable, and while some panels are great, as many are awkward.

Really, there's nothing awful about this comic, it's simply average to good. And given Marvel's months-long hype, I was expecting better.
Avengers #1 review