Batman: The Brave and the Bold #17 review 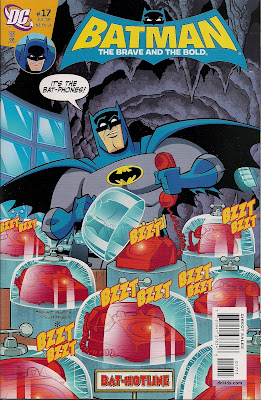 Goodness, look at that cover - Batman's phone bill must be huge. Good job Bruce Wayne's such a rich fellow.

But who's he teaming up with? As it turns out, pretty much everyone. For this is a special issue, one veering away from the fun formula of a mini team-up followed by the main event. Here it's one TV-style prologue after another as we spend a week with the Caped Crusader and learn that 'A Batman's work is never done'.

And the pairings are a treat. There's Metamorpho, the Green Lantern Corps, Jonah Hex, Hawkman, the Inferior Five, the Creeper. Merry, Girl of 1,000 Gimmicks for crying out loud, beating a bad guy with bubblegum and sass! The villains are equally eclectic, including Mongul, the Gentleman Ghost, Mr Element ... some guy in a tracksuit. And there are cameos to boot, including the one 'Bat' character I don't believe Batman has yet met.

It's a speedy read, yet a satisfying one, with good-natured energy and banter carrying us from one Sunday through to the next. A Batman bound to contemporary Gotham may be the standard these days, but who wouldn't wish to be this version of the character, a guy fighting in space one day, the Old West the next, courtesy of writer Sholly Fisch and artists Robert W Pope and Scott McRae?

This series doesn't have the following of other Batman books, but it's building to be one of the most consistently entertaining of them all. Have you tried it yet?
Batman: The Brave and the Bold #17 review Sholly Fisch Robert W Pope Scott McRae