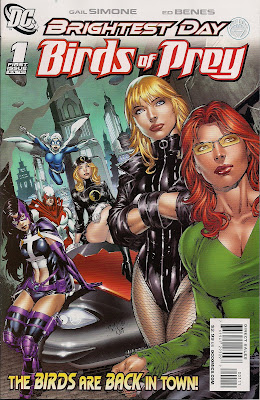 You can go home again. The Birds are back from their Bat-event-imposed cancellation, back together and back in Gotham City. Oracle, Black Canary, Lady Blackhawk and Huntress are all great separately, but together they're legendary. This issue isn't the beginning of a six-part storyline, showing the team gathering, one by one. Nope, Oracle simply calls her pals up, informs them of a threat and the women drop everything, obviously glad of the excuse to reunite.

Before the reunion, though, we get a mini-adventure focusing on Black Canary, who's out to save a little kidnapped girl from scumbags. It's heartening to see Canary get some attention on her return to the series that suffered so when she was stolen by other editorial offices, having been made popular by BoP writers Chuck Dixon and Gail Simone. The Icelandic episode here fills new readers in on her skill, sonic scream and situation as foster mother to a kid, Sin, whom she allowed to be shunted away as soon as they bonded.

This issue, written by the returning Simone, sees two new Birds-to-be introduced, Hawk and Dove, characters I've enjoyed since their Eighties debut as a pairing, and two characters I want to see out of this book as soon as possible. For one thing, they deserve a series of their own, something unlikely to happen while they have a regular slot. For another, they're dragging tedious Blackest Night baggage with them. And they're crowding a book that works best with a tiny cast of regulars.

I've faith that Gail can make their presence worthwhile, but I hope she kicks 'em out as soon as DC bigwigs Dan DiDio and Geoff Johns aren't looking. We need room for Oracle (Barbara Gordon), Huntress (Helena Bertinelli), Lady Blackhawk (Zinda Blake) and Black Canary (Dinah Lance) to shine and interact. And if Gail can manage that and still find room for wannabe heroine Misfit, all the better.

Hawk and Dove don't sign up this issue, but it looks likely after Zinda and Dinah track them down to a bar where Hawk (Hank Hall) is drowning his sorrows and tomcatting, and Dove (Dawn Granger) is being uncharacteristically wet about it.

As ever, the dialogue sings - each regular has their own voice to the extent you'd know who was speaking without looking at the artwork, and the narration by Canary, along with a little bit of Babs, provides insight into them and their team.

There's a final page shocker, as ... someone or other appears. It may be the villainous Lady Shiva with a new look. It might be the aforementioned Sin, having gone through the ageing-up that often occurs when unwanted comic book kids aren't simply killed off (see Aquababy, Bobby Long, Cerdian, Lian ad infinitum). Just so long as it isn't Cassandra Cain, the former Batgimp.

The artwork by Ed Benes - another returning creative - is hard to fault. Let's see: Dinah's head looks a tad large on the cover, quick, someone inform Chandler Bing! Other than that, no complaints. Ed has a good handle on the regulars, and his Hawk and Dove show promise. There's little in the way of the cheesecake associated with him, just attractive comic art. He even allows Dinah and Zinda to be sensible and cover up those fishnetted/bare legs while in Iceland ... unless that was the work of colourist Nei Ruffino, who here gets to use a moodier palette than for her regular Supergirl assignment. She really is very good, as is letterer Steve Wands. His Canary chatterboxes, in particular, sit wonderfully well with the rest of the art.

The only visual tweak I'd like to see is Huntress out of that dumb midriff-baring outfit and into something more befitting a Mafia princess schoolmarm turned gangbuster, and Babs given some sexier specs.

Really though, there's nothing to dislike about this issue and plenty to praise. So praise be, the Birds are home to roost.
Birds of Prey #1 review