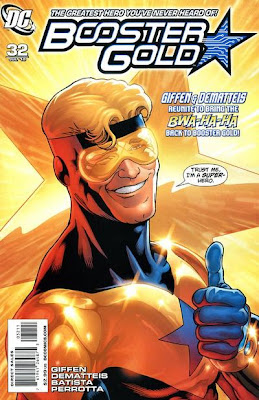 It's the debut of a new creative crew on Booster Gold and it's not what I expected. Think the writing team of Keith Giffen and JM DeMatteis and you think funny comics. Justice League, bwaa-ha-ha and Blue Beetle. And that's what the splash page here leads you to expect, with its jokey credits.

There are funny lines here. Plenty of them. But when a story is set on one of the darkest days of Legion of Super-Heroes history, too many jokes will get a guy killed. The day in question is April 8, 3082, when Darkseid takes over the people of Daxam and has them terraform their world in his image. Tasked by Rip Hunter with rescuing an important artefact, rather than immediately head back 1,000 years, Booster sticks around to save lives.

It's the act of a real hero, and one that, by issue's end, is set to change Booster's life. Before that he does his best to protect a party of mostly cranky tourists from dying amid the devastation, and battles one of the Legion of Super-Heroes greatest foes. It did my heart good to see the original version of this insanely attractive character, but is it OK to give her identity away here? Should eye?

The action here begins on page one and never lets up. Likewise the characterisation, with Giffen and DeMatteis showcasing Booster's intelligence as much as his wit. And for the first time I can remember, someone actually has Booster use his skills as an American footballer during a conflict. The writers also demonstrate their skill with tone, ensuring that the reader isn't jarred as the mood darkens. There's a running gag about one character needing to pee, but given her background, and the situation, she probably would. And it's a refreshing kind of realism for a comic book to embrace. Ditto the mix-up noted by Booster at the close of the story, as he chews out Rip Hunter, Time Master (something he doesn't do nearly enough).

Chris Batista joins the book as penciller this month and he delivers on every page. The visuals are always exciting, not just when there's blasting and dodging, but when people are chatting too. And - this is going to sound weird - there's something friendly about the pages, a good-naturedness that invites you to spend time with them. There's no breakdowns credit for Giffen but if he's not done thumbnails at least, there's certainly his influence here in the figurework, especially the faces. Inker Rich Perotta adds weight to the visuals, giving the pages a terrific strength that's further upped by the modelling from colourist Hi-Fi. All in all, what we have here is a feast for the peepers.

This issue bodes well for the future of Booster Gold, though I hope the final page tie-in to Justice League: Generation Lost is simply a nod to Booster's appearances there, rather than the beginning of an extended tie-in. I'm sure the creative team would do a good job - Giffen is, after all, co-writing the book - but I like Booster's series best when it goes its own way - JLI:GL has 26 issues to tell its story, it shouldn't need to spill over into this one. Whatever happens, this book bears watching.
Booster Gold #32 review