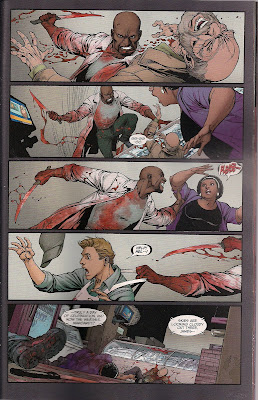 Not now. It seems that any DC comic book with Geoff Johns' name attached has a good chance of featuring bloody maiming or slaughter. This issue has both, with Black Manta resigning from his job as a fishmonger by gutting elderly customers and a shop assitant, and Hawkman crushing the faces of a couple of henchmen with the aforementioned medieval weapon. Oh, and a pirate is bloodily swallowed by a dead shark.

If we're lucky, next issue will have the Atom kerbing someone while growing to his full 180lb, or Captain Boomerang decapitating toddlers with razor-sharp 'rangs.

And if the violence we see isn't enough, there's the threat of rape towards a little girl. Lovely.

Seriously, there are three editors involved with this book. Didn't one think it a good idea to ask Johns and co-writer Peter J Tomasi to tone it down? Or will this level of violence become standard now the former is DC's chief creative officer?

I hope not, because my distaste with the scenes described overshadows the things I enjoyed, of which there are several. The decision to focus on only a few of the 12 newly resurrected heroes is smart and the individual storylines have potential - I can't wait to see Aquaman and Mera confront Manta, the killer of their son; I'm intrigued by J'onn J'onnz's tweaked memories as he bids to rebuild Mars; the new status quo for Firestorm is a grabber; and I always enjoy Deadman, so I'm happy to follow him for awhile.

It's true that I couldn't be less interested in the mystery of the white lantern, being tired of the ever-expanding Green Lantern mythology, and Hawkman and Hawkgirlwoman seriously need a rest from reincarnation plotlines. But given the talents of Johns and Tomasi, I may yet enjoy these threads.

There's definitely enough to keep my buying this book without the distasteful stuff, but if the spatter count remains high, I'm out.

Let's mention a few more positives: we're reminded that Aquaman, a guy tough enough to survive the pressure of the ocean depths, can therefore repel the odd bullet (and an armoured costume helps too); we see that Mera's old power set is basically still around even if everyone seems to be avoiding the traditional term, 'hard water'; the spread of a giant, departed octopus is marvellous despite someone apparently getting the page proportions wrong, necessitating a thick black border above and below; J'onn J'onzz retains the serenity that's as much a part of him as the sense of humour which we'll hopefully see when it's appropriate.

And the art, it's darned attractive, with scene after scene of well-composed action around the DC universe. Whoever made the decision to have separate artists for each hero segment - let's credit those editors where I blamed them earlier - is smart, as we get appropriate illustrations for each character and are less likely to see this fortnightly book delayed. Ivan Reis, Pat Gleason, Ardian Syaf, Scott Clark and Joe Prado are the pencillers, Vicente Sifuentes, Mark Irwin, Oclair Albert and David Beaty the inkers, and they can all take a massive bow. As can colourist Peter Steigerwald, even if I am tempted to sneak into his studio and swap the red markers for black (mind, it's probably a bleeding' computer, no gag intended).

Talking of gags, David Finch's cover, with Hal Jordan straining to lift the white lantern, has been the subject of smirks elsewhere. Thanks goodness I'm well brought up. 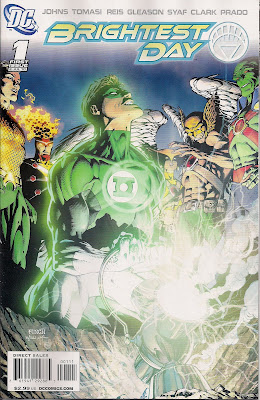 Overall, this isn't a bad comic book - it's polished professionalism to the core - but I found it as objectionable as it was entertaining. I'll give it a few more issues, but many more like this and I'm packing it in.
Brightest Day #1 review