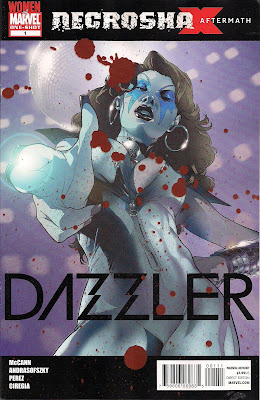 Ah Dazzler, she never had a chance. Debuting as the Disco Dazzler in 1980, long after the musical fad had died, saddled with shocking eye make-up, a glitterball around her neck and roller skates. Sent against some of Marvel's toughest villains - Dr Doom, the Enchantress, Galactus - in order to prove she had what it takes, Dazzler just looked even more incongruous. Finally she lost her solo title, was absorbed into the world of the X-Men and became little more than an occasional background player.

And yet, Alison Blaire did have what it takes. She started out using her mutant power to convert sound into light to make flashy effects for her stage performances, but she soon learned how much more she could do. Laser blasts, concussive pulses - this was a woman limited only by her power source, the surrounding sound to be tapped into.

But her biggest asset? Her character. Time and again she faced ridiculous odds, but time and again she'd overcome them. Never say die was Alison's motto and while that's hardly unusual for a super-being, few characters have been so often underestimated, so denied respect.
Still, as with even the most obscure act, Ali had her fans, and one of those keepers of the faith is Jim McCann, who writes the heck out of this book. Labour of love doesn't begin to describe it.

The scenario has Alison kidnapped and dropped into Arcade's Murderworld at the behest of her lunatic half-sister, Lois London (an unfortunate name, because the minute you see 'Lois' written down you can't but think of the original comic book, equally alliterative, Lois). She's also a mutant, able to kill with a touch, but rather than touch Ali and have done with it, she wants to see her suffer as she believes Alison made her has suffer - I won't go into detail, it's standard mutant pity party stuff. Before entering the Murderworld set, Ali is cajoled into donning her original stage outfit, the legendary silver pantsuit. This makes for perhaps my favourite page as Ali - who narrates this extra-length book's first story, In the Blood - contemplates her journey from gimmicky pop act to superheroine to ... what? She's changing clothes but the sequence isn't at all prurient, rather, the close-ups of the outfit's constituent parts accentuate her thoughts.

The fight scenes with Arcade's robots - representing the worst foes Dazzler defeated - are fun, showing our heroine is as handy with her fists as with her voice. They also allow her to critique their earlier run-ins. And while that sounds as if it may be annoying in a meta-fictive way, it's not; McCann's too smart a writer for that. His Alison is insanely likeable - smart, funny and not ashamed of the sillier-seeming parts of her past.

If things seem to be going a little too much Ali's way, as she despatches robots left and right, the appearance of a flesh and blood villain, Klaw, puts a stop to that. Think Alison - who converts sound into light energy - versus a being of living sound would be a rather quick win for her? Not here as, like Dazzler, he's learned and grown.

And after Klaw, Alison has her sibling to face who, as well as her death touch, assails Ali with some very Claremontian skanky lingerie. It's probably not spoiling anything to say Alison prevails, showing both heart and pragmatism as she has Lois shipped off to the X-Men's island Utopia (yeah, right) for physical and emotional treatment.

McCann's script is gifted the visual energy it requires by artists Kalman Andrasofszky and Ramon Perez. I'm not a devotee of the 'we must have a name artist' school, but a single artist would have been appreciated, as while both illustrators have merit, their work doesn't flow easily into one another. Under Andrasofszky, Alison looks strong and attractive and the battle scenes are simply spiffy - powerful when there's a physical confrontation, crackling when it's all energy blasts. The angular work of Perez, in the second half of this story, isn't the best match as pinch-hitter for the softer stylings of Andrasofszky - Klaw, for one, looks like a manic ballet dancer. I'd be interested to see Perez handle a strip alone, so he gets to control the whole thing - the pages here are reminiscent of very early Alan Davis, back when he was doing covers for Marvel UK reprint weeklies, so there's certainly promise.

The only image I was especially un-keen on was, sadly, the money shot, as a splash by Andrasofszky shows Ali in her silver-suited glory for the first time in years. She should look powerful, defiant, ready for anything ... what we get is a full-figure upshot with Ali looking drag-queen pouty.

This book does like the low-angle shots - look at that cover, with Alison apparently suffering a bad case of bleeding gums as she stares down from the stage at us, her adoring public. It's a nicely produced piece by Andrasofszky, but really, I could have done without the blood. Plus, the furniture layout meant I missed the book on the shelf on my initial visual sweep. With that meek new logo at the bottom and some X-Men crossover memorial at the top, this comic seemed to be called Necroshax. Do US comics always display individual titles fully, with no overlap? Either way, that's pretty much a zero impact masthead. Black on purple? The whole cover could do with a shot of red, brighten it up - hey, this is Dazzler, bring on the artistic bling.

The story continues in a back-up by McCann and Francesca Ciregia, with Ali having delivered Lois to Utopia, where Cyclops lectures her about how a killer has no place there. Ali, no wallflower these days, reads the pompous twat the riot act, pointing out that he's sleeping with Emma Frost, has Magneto living there and so on. So Lois will stay, and stupidly named mentalist Psylocke - a friend to Ali since their days on the X-Men together - offers psychic counselling. For her part, Ali must get in touch with their mother, let her know what's happened to Lois. You just know she'd rather be facing Dr Doom.

McCann's script for Tough Call is note perfect, as estranged mother and daughter reconnect in a pleasingly unschmaltzy manner, and there's a clever bit of sideways business showing what Ali would really like to say. And Ciregia's art, open in the style of a Seventies romance comic, suits this diversion well.

McCann has some work to do with this comic - reintroduce Dazzler, lay out her past, make her present interesting and pray he does that well enough to make readers want to see her future. Well, I certainly want to see more of Alison Blaire, solo artist. She shouldn't be confined to the X-Men's chorus line, she's too good a character. And as McCann and co remind us here, she's a star.
Dazzler #1 review Jim McCann Kalman Andrasofszky Ramon Perez Francesca Ciregia