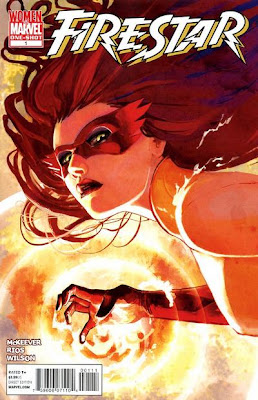 Angelica Jones, former Hellion, New Warrior and Avenger, is back living with her widowed dad and studying art history at university. She's also regularly venturing out as Firestar, keeping New Yorkers safe and wearing herself out in the process. For Angelica's battling back from breast cancer - as detailed in the recent Marvel Divas mini series - fitting the rest of her life in around chemo sessions.

That's heroic in itself. What's also rather impressive are the efforts she goes to to help someone who's never been anything other than a bitch to her - for while fighting crime is hardwired into Angelica after years of superheroing, you could forgive her for brushing off life's smaller irritations. She has an understandable amount of self-pity but she's going forward, and if she can help someone else on their own journey, all the better. Writer Sean McKeever manages to show Angelica as a believably good person, without her being a saint.

There aren't any super-villains in this one-shot, no monsters or aliens. Angelica ends a carjacking, and rescues someone, but this is no flashy story, trying to wow readers into demanding more solo Firestar. It acts as a transition from Marvel Divas, in which Angelica was the object of her friends' sympathy and admiration, to her upcoming role as a member of the new Young Allies. More importantly, it's a character piece, concerned with telling a good story about one of Marvel's lesser lights as part of the Women of Marvel promotion.

And it is a good story, as McKeever employs empathy and a fine ear for dialogue to let us get to know Angelica a little better, make her seem more real. It's appropriate that a story about Firestar should prove one of the warmest comics in ages, whether we're talking the relationship Angelica has with her dad, fellow superhero Monica (Photon) Rambeau or old school enemy Cassie Sandusky. And McKeever's script ensures there's not a hint of saccharine, just smart superhero soap. I'd not want issue after issue like this, but as a one-off positioning Angelica for the next stage of her Marvel career, it's terrific.

Emma Rios proves a great choice for this comic, given her knack for naturalistic detail; Angelica's the mutant mistress of microwaves (I love to type this stuff!) but she's a regular woman in an ordinary world. So it's good to have an artist who won't make super-heating a can of soup look like an invasion from Dormammu's dimension. Rios also tends towards normal bodytypes - there are no massively endowed women here, something which would be especially inappropriate for Firestar given that she's fighting back from illness. I began the issue thinking about what ratty hair Angelica has, but as the story reminds us, she's wearing a wig - explaining why the splash has her flying down with one hand on the top of her hair. Nice touch. I have to say, though, Firestar needs a new costume - the yellow suit with flouncy flame detail remains a shocker, and isn't even appropriate given that she focusses heat, not fire. Hmm, maybe that name should go too ...

Matthew Wilson colours in that Marvel style favouring odd fleshtones and blotchy shadowing, but does a good job within that school. His reds and yellows when Firestar is in action are perfect, and the tones match the mood throughout. And Kristyn Ferretti, a new name to me, does a good job on letters so I hope to see more from her.

Someone else I'm unfamiliar with is Stephanie Hans, but on the basis of this searingly attractive cover, I'm glad to be acquainted.

Of all the Women of Marvel specials so far this year, Firestar is my favourite. It's unlikely to be the hottest of sellers, but I hope we see at least another special by the same creative team. There's certainly more gold to be mined in Angelica's story than Young Allies will likely have room for - her continuing recovery, feelings for Vance Astro, path towards a career, friendships with other Marvel heroines and of course, good old-fashioned baddie bashing ... yup, I want more.
Firestar #1 review McKeever Rios Wilson Ferretti