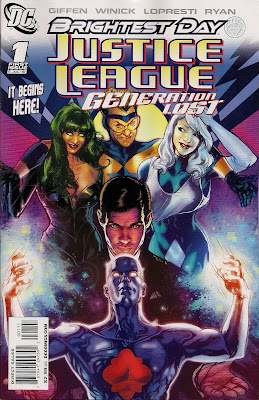 Brightest Day brought Max Lord back from the dead, giving DC an easy way to reboot him as the good guy he once was, rather than the megalomaniac murderer seen in the Infinite Crisis crossover. Sadly, DC has gone for box number 2, as I increasingly suspect the term 'Brightest Day' is being used ironically.

Evil certainly wins the day this issue, as Max murders without compunction and consequence prior to using his mental push powers to make the world forget about him. Previous to that big finish (previously seen in Brightest Day #0), though, we see former Justice League International members Fire, Ice and Captain Atom get back together to hunt him down. But fellow former member Booster Gold is sidelined. That's either because everyone thinks he's an idiot - Power Girl certainly does, in a scene harking back to her angry days and not boding well for scripter Judd Winick's upcoming takeover of her book. Or because, Max having killed best friend Ted Kord, he's considered by his friends to be too close to the case.

There's a bit of a disconnect at the start of this issue as Superman tells the world, via a press conference, to watch out for Max. A news report explains that people were alerted to his resurrection when Max was spotted by a street camera. Really? I realise Superman wasn't around for the conclusion of Blackest Night, but most of the hero community were there as Max was brought back by the white entity thingie (henceforth known as the WET, if I remember). Didn't anyone consider him a threat back then?

Still, if that's an editing glitch rather than an unnecessary creative choice to reintroduce Max, it pales beside some narrative boxes on page five. 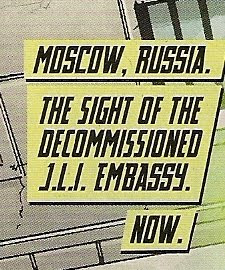 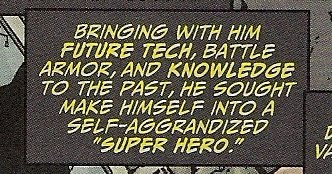 'Sight'? 'Self imposed transplant'? The whole of that third box? I realise we're in Russia but doesn't anyone speak English? Oi, DC, if you're in need of a copy editor, I'll up sticks and move to New York, no bother. I'll even throw in some lettercols for you. But you do already have editorial staff - wake 'em up.

Thankfully, the book gets better after this. Ice is stirred from a blue funk, Fire shows her Checkmate chops as field leader, Captain Atom has shaken off the shadow of his Monarch persona (please DC, at least leave that awful blip buried) and Booster proves a decent detective. Winick's dialogue crackles nicely once Fire, Ice and Atom get into action, and while I don't like having an eeeeevil Max, he's written rather well here as a self-deluding Bond villain. And Ice has a fantastic new sound effect for her powers, SCROOCH! Don't we all need a scrooch every now and then?

The big idea that only our four JLI heroes remember Max's existence and crimes is a tough one to sell - even if he's wiped out electronic records of his existence, newspapers survive - at the very least there'll be records of Wonder Woman's trial for his 'murder'. Booster could take colleagues back in his time bubble to witness Max killing Blue Beetle. Or, in a highly original twist, heroes might actually give their trusted colleagues the benefit of the doubt.

What's more, unless this is the end of Max in Generation Lost, he's going to be plotting naughtiness soon enough and then he's back on the heroic radar. So why set this conceit up at all?

I've no idea, but co-plotter Keith Giffen has written enough smart stories over the years to deserve the benefit of the doubt, and this issue was sufficiently entertaining to bring me back for more. Another big plus is Aaron Lopresti, one of the comic's rotating pencillers, working over Giffen's breakdowns and inked by former Wonder Woman partner Matt Ryan. It's simply beautiful superhero work - expressive, dramatic and perfectly paced.

Tony Harris's Booster Gold is a little too Keaton-Slater manic of face for me, but I do like the rest of the characters on his nicely composed cover. I look forward to seeing how he handles the rest of the series. I'm pretty sure I'll be buying.