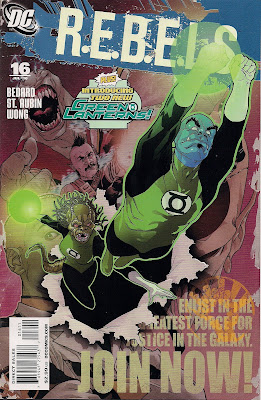 Is this book in trouble or is the excitable cover blurb 'INTRODUCING TWO NEW GREEN LANTERNS!' down to someone being genuinely excited? I'm not, the ringslingers already have two books, with a third on the way, and their imagery is dominating the cover of the new Legion of Super-Heroes book next week. Go on, git!

This month, when we're not meeting GLs from Okaara and Psion, we're with Vril Dox as he rebuilds his intergalactic space agency after its destruction by Starro the Conqueror. He immediately gets a new recruit as Starfire - all sad because Dick Grayson doesn't love her - signs up. But then Captain Comet quits. That's not down to Kory's presence, though, as the telepath and the overemotional space hussy get on like a house on fire. Perhaps he'll stay after all.

This issue is also concerned with the rebirth of Rann, which Dox has placed in the Vega sector to fill the hole left when Starfire's world, Tamaran, went belly up. I'm delighted to have Rann back, it's such a seminal DC world, and Dox's placing his new HQ here means we'll see lots of it.

R.E.B.E.L.S. #16 is basically a breather after the extended Starro sequence and I couldn't be happier. Writer Tony Bedard has my admiration for producing such a rich, tightly plotted book over the past year and a half, but the comic's been so action-packed that we've barely gotten to know the new characters. Ciji the Durlan, for example, previously seemed a total stinker, but here she's a nice kid. And Bounder, will he ever become more than background fodder? He doesn't actually get to do anything this issue, either, but more stories like this mean there's a better chance he'll eventually do more than show up for a panel or two, do his skinny Bouncing Boy thang, and bugger off again for six months.

That is, if charismatic established characters such as Starfire, Adam Strange and Dox don't hog too much panel time. Captain Comet leaving alleviates the problem a little - just so long as a GL doesn't take his spot. I want to know and love the recent additions as much as I did the original L.E.G.I.O.N. members, who show up in a flashback here to make me terribly nostalgic. It's going to be a balancing act - I don't want to not have firecracker scenes with Dox and Kory as we get here - but Tomasi has great writing reflexes.

There is some action this issue, as Komand'r - Starfire's evil sis, Blackfire - turns up to cause trouble. Ol' pointy nose may not be as pretty as Kory, but she's always great value. I bet she cackles next time.

Regular penciller Claude St Aubin gets a new inker this month, Walden Wong, and the difference in comparison with the previous teaming, with Scott Hanna, is apparent. A few panels - usually mid-shots - look a teensy bit awkward, but overall, I like the combo and I've no doubt that the artists will get the measure of one another soon. I definitely appreciate the effort being put into matching facial expressions to script - the faces pulled by Captain Comet, a matinee idol of a hero if ever I saw one, give him a bit of character. That never happens. And the smiling Dox is suitably weird.

If anyone is noting these things, though, could we please have Adam Strange back in his traditional costume rather than the tracksuit version he's currently sporting? And that bloody great harness has to go - streamline, dahling!

Kudos to colourist Jose Villarrubia for some fantastically bright work, that works, and letterer Travis Lanham, collector of intergalactic typefaces.

With luck a few Titans fans will jump on board now Starfire is here, and help grow this book's audience to the size it deserves.
R.E.B.E.L.S. #16 review Bedard St Aubin Wong Villarubia Lanham