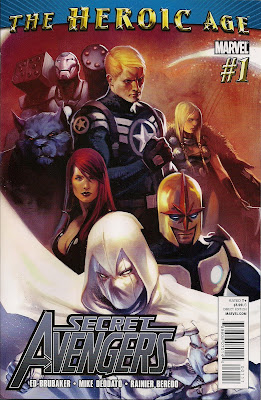 Sshhh, don't ask me how I know. The set-up is that Steve Rogers, having gathered warriors to fight the foes no single hero could withstand in Avengers last week, has actioned his own sub-team to fight the foes no single hero will admit they're taking on. It's a black ops team of Avengers, though as this is (fanfare please) The Heroic Age, it's unlikely anyone will be killing - super-secretary Sharon Carter even refers to them as Shadow Ops.

Basically, it's superheroes with an espionage edge, which explains the bizarre sight of the Asgardian Valkyrie joining Black Widow for a spot of Sydney Bristow-style seduction in Dubai. Mind, as a warrior maiden, Valk rather objects to being pawed by a chief of sinister oil group Roxxon. She blows the op in fine style, leading to the funniest exchange I've seen this week (click to enlarge). 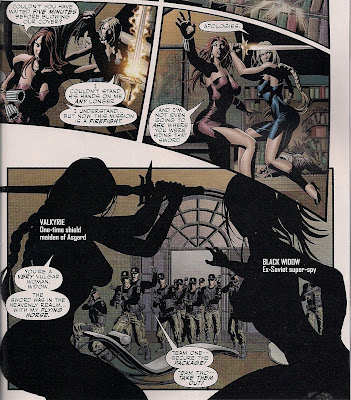 Fighting ensues with Steve Rogers jumping in from the sidelines to help out, and our heroes grab what they came for ... the Serpent Crown.

Or maybe a Serpent Crown, there are so many knocking around the Marvel Universe, and the corrupting wee critters always make for a good yarn. By issue's end we learn there's one on Mars too, and it's going to cause trouble for Secret Avenger Nova (he's so secret that his fellow members don't seem to know he's with them).

Apart from the Widow, Valkyrie and Steve, fellow members include War Machine, Moon Knight and a nattily re-costumed Ant-Man, last seen being a thoroughly bad lot in Norman Osborn's Thunderbolts. Still, redemption looks to be a theme of (fanfare etc) THA so Steve gives him a chance, likely realising that it's good to have another trained Shield agent on side. Ah yes, actual professional espionage types ... well, the Widow spent years as a SHIELD agent, Sharon has had a lifetime with the organisation, Beast has, er ... Valkyrie ...? OK, War Machine aka James Rhodes is a military type and he's dealt with industrial espionage in Iron Man. And Beast is a mutant genius, Valkyrie is a demi-god, Moon Knight a mercenary, Nova a cosmic hero.

Oh all right, they're basically cool characters with nowhere else to go (except maybe Beast, but he's always been more fun as an Avenger than an Uncanny Angst-Man). And they provide Steve Rogers with as much raw power as any Avengers team, while hitting the necessary specialist boxes - Cap (I can't not call Steve Cap, dammit) is the strategist, Widow the superspy, Ant-Man equals stealth, Beast is brains, War Machine the super-powered pilot, Nova brings sheer power, Moon Knight is the wild card and Valkyrie the mythical warrior - you really can't have a proper Avengers team without a mythical warrior.

At least that's my guess as to everyone's roles. This issue has flashbacks of Steve inviting a few of those on his wants list to sign up and while he says what's in it for them (a shot at redemption, being less nuts etc) he doesn't say why he wants them. So yes, I'm going with him desiring a decent mix of skills.

Whatever the case, writer Ed Brubaker does a very good job of showing them working together. They don't all know one another but they're bound by mutual respect for Cap, and he gives them that back in kind. They're his people and he cares for them, checking that they're happy with their role, feeling OK after a mission and so on. I've really missed this guy and the sooner he's back as Official Cap the better - here he's taken to wearing a pretty darn Cap-like union suit, though with his face unmasked. Very stealthy!

I can live with it, though - this debut issue was a fine romp, as Brubaker throws us right into the action, giving us background details when it fits the rhythm of the story. The characters are likable - even Ant Man has shown a good side on occasion - and the first mission, while darker-tinged, is firmly in the realms of the traditional Avengers mythos. There's a shock ending showing that a beloved character may be working the wrong side of the tracks (what, again? Nice loincloth, though) and I'll be back next month to see what comes next.

Hopefully more excellent Mike Deodato art - he's spot-on for this book, able to draw good-looking, athletic characters in near perpetual motion against hi-tech backdrops. The storytelling is first rate, with Deodato proving a master of pace. And the colours of Rain Beredo are the icing on the cake, adding mood and interest throughout.