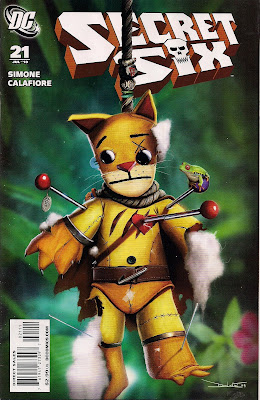 Awww, who could resist Daniel Luvisi's cover? Seriously, that poor little Catman doll needs a hug. Inside it's poor little Catman as we see that young Thomas Blake's dad was almost as bad as teammate Scandal's. For around the time she was being beaten with sticks by Vandal Savage's minions to toughen her up
- he read Dr Spock, you know - Tommy-boy was being encouraged to kill an injured lioness to learn about life. Hmm, who's the animal here?

It's an interesting insight from writer Gail Simone into Catman as he faces the fact that his own baby son is likely dead at the hands of kidnappers. The obvious assumption is that given his background Catman was afraid of being a rubbish dad himself. Then you remember that he's allowing the boy to be raised by his mother Jade, the mass murderer known as Cheshire. (Her daughter, Lian, being looked after by her dad, Arsenal, has just died in an attack on Star City. Oops. Time for Cheshire to find another hero or villain to father a kid - preferably an invulnerable one.)

But back to the flashbacks, in which there's a strong implication Catman eventually blasted his father with a shotgun when his mother, a buxom wench who starred as Phantom Lady on screen - suddenly there's a team-up I want to see - was threatened by him one time too many. 'Hoist and 'petard' come to mind.

In the present, Catman tracks down Loki, a massive South African mercenary involved in the loss of his son, and shows him that you don't mess with a member of the Secret Six.

Speaking of whom, Scandal, Deadshot and Ragdoll, worried about their sorta pal, follow him to SA courtesy of increasingly unstable young sorceress Black Alice. She eventually borrows magic from the demon Etrigan and becomes a she-demon named Estrogan. Remember that next time you tell me you don't do puns, Gail Simone!

Bane and Jeanette, meanwhile, have gathered four spare baddies for some mission that will become clear, with luck, next issue - this is the third of four parts. Said nogoodniks are dopey King Shark, anti-Atom Dwarfstar, stupidly named generic assassin Lady Vic and Giganta, ever present at villainous gatherings and ever ineffectual. This alternate Six appears for just two pages but Gail uses her skill with dialogue to establish their differing characters. Panels such as this, with Bane, Jeanette and her lowly, Insignificus, are why I love this book.

Jim Calafiore proves less than sterling at drawing male bottoms - check out those flat-arsed game reserve guides - but great at everything else. Money shots include a shot of Black Alice becoming a young Dr Occult (Intern Occult?), a close-up of Dwarfstar through a glass madly and Catman as pride leader, but the storytelling is fine throughout. The emotions of the characters are ever evident, the storytelling is clear and, in a departure from the norm, Calafiore gives us a spot of border decoration. The flashbacks look especially good as artistic partner Jason Wright conjures up colourways suited to the scenes. The palette for the opening Africa sequence, for instance, reflects the colours of Kenya while referencing the sepia so popular for fictional flashbacks. And the final shot of Catman and lions is magnificently moonlit.

Secret Six continues to be one of DC's strongest books, blending compelling characters, clever plotting and edible art. There's an ever-present viciousness - usually you have the threat of violence, or the aftermath; when we do have on-panel maiming and killing, it's villain on villain, so more appropriate than in a comic such as Brightest Day #1 (see separate review). If you haven't yet, check it out.
Secret Six #21 review Gail Simone Jim Calafiore Jason Wright Daniel Luvisi