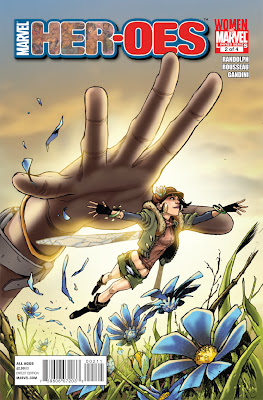 Secrets are revealed throughout the sophomore issue of Her-Oes - the Marvel mini reimagining its heroines as high schoolers - as Janet Van Dyne mulls over the revelation that Namora, whose assault last issue she barely escaped by shrinking and flying away, also has powers. We discover that Janet’s father was responsible for her abilities due to an accident at his lab two years previously. After this breakfast revelation, Janet’s day becomes more complicated when she nearly blasts cute boy Wade after he startles her in the hallway. While wondering what's making her blasting powers trigger so suddenly, Janet finds that her father can't get the basketball tickets for her date with Wade.

This crisis is pushed to the side when Namora faces Janet in the parking lot to talk about their “mutual uniqueness”. Best friend Jen Walters, who is about to give Janet a ride, becomes upset that Janet would want to talk to Namora alone and, as with last issue, we see her leave abruptly.

While engaging in slushie diplomacy, Janet and Namora develop a form of adolescent détente as they discover that their families moved to Cresskill County two years ago. Their surprise visit to the lab where Janet’s father works again results in Jen - an intern there - becoming agitated and fleeing after Janet wants a private conversation with her father. Namora follows Jen to a dark corner and, as if she knows what will happen, splashes some saline on her. Jen “goes green” in one brilliant splash page as Namora is punched through a wall. Unfazed, Namora reveals her winged feet and literally flies straight into battle with She-Hulk.

To her great distress, Janet finds out from her father that he knew about Jen’s condition, before she is told to get her friends inside to avoid being seen. Namora and She-Hulk hold their own as they exchange massive blows, until Janet intervenes - and Jen instantly reverts to normal when she recognises her best friend. Jen passes out after muttering that they will now be taken and locked away forever. Before Janet fully understands the implications, the issue ends with the appearance of a mysterious red haired girl floating above them.

The debut of She-Hulk is the highlight of the issue - she appears more like a feminine Incredible Hulk than the gamma-powered supermodel in the regular Marvel continuity. I find this version more appealing story-wise, for if Jen could transform into a stunning jade beauty, what would be her motivation (aside from avoiding torn clothing) to not remain She-Hulk? Artist Craig Rousseau and colorist Veronica Gandini accomplish a homage to both the Savage and Sensational She-Hulk, showing a torn white coat and a purple outfit respectively. Fishbrain’s green lettering of She-Hulk’s word balloons has you hearing her deep booming voice reverberate across the panels. And writer Grace Randolph does a superb job of keeping the reader engaged with a plot that does not lose focus or drag in any way. The reader is left wanting more and I’ll be counting down the days until the next issue.
EUGENE LIPTAK
Eugene Liptak is a librarian and author who celebrated the 50th anniversary of Supergirl with a comprehensive display at the Pima County Public Library in Tucson, Arizona.
SPECIAL GUEST REVIEW Marvel Her-Oes #2