May 03, 2010
It's the Never-Ending Battle. The war to keep my interest in the New Krypton storyline. And these past couple of weeks, the fight has been lost.

The first three titles here wrap up the storyline around Brainiac's war on Kandor, first city of New Krypton. Action Comics is the side story of Kryptonians Nightwing and Flamebird on Earth. And War of the Supermen revs up the chaos engine once more, as Krypton declares war on Earth. I am, truth be told, more than a little war weary. The New Krypton storyline should have ended with issue #12 of Superman: World of New Krypton which, after a strong start, outstayed its welcome - issue after issue came and went with plenty of turns but precious few twists. It was as if halfway through someone decided to extend the thing, forcing the creative team to meander, and even flail.

The story continued in the rest of the Superman Family books and it's not all been bad. The Legion of Super-Heroes, after months of individual cameos, massed and proved a huge asset to Superman and Supergirl as they sought to protect New Krypton. Superman stopped being a camp follower and quit General Zod's army. And ... well, let's have a look at the issues in order of publication, shall we? 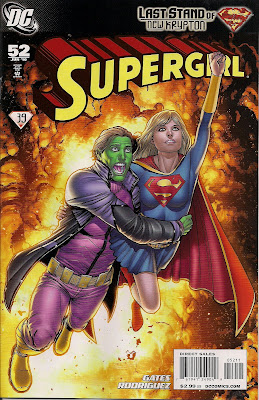 SUPERGIRL #52: The best of the bunch, as Kara and Brainiac 5 bid to bring down Brainiac. That's the plot, the story is Kara trying to unpick Brainiac's 12th-level brain to learn what he's hiding from her. Which is, that in his corner of reality, he romanced Supergirl, only to see her die. Whether that's him remembering the Crisis on Infinite Earths, or other circumstances in these changed times, isn't clear from his inner monologue. That's not important, I'm simply grateful for the bittersweet script from Sterling Gates in which Brainiac 5 bids to distract Kara from her insistent probing. His ridiculously high IQ proves of little use in the face of the sadness he feels around this version of his lost love.

For her part, Kara is attractively bright, focused on the job at hand - she even out-plans Brainiac 5 - but always questioning, not ready to let a mystery stand. And bit by bit, her charm, intelligence and courage pierce his melancholy, while she warms towards the 'cryptic and broody' Coluan.

The issue also has Lex Luthor killing one of Zod's soldiers as he prepares to betray supposed ally Brainiac, and ends with Superman and the Legionnaire Quislet arriving. It's a rich read from Gates, pleasantly drawn by Ivan Rodriguez, and topped off with a splendid cover by Matt Camp. 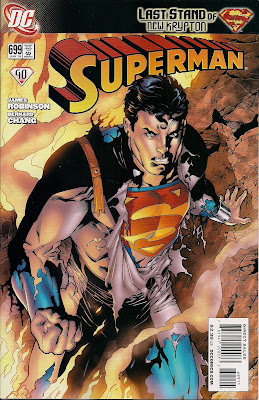 SUPERMAN #699: And here's another lovely cover, from Aaron Lopresti, with a very intense Superman being burned out of the New Krypton army uniform he rejected, oh, two months ago? Inside, our hero confronts Zod about his duplicity while they reluctantly team up to fight Brainiac drones, Mon-El helps the Legion fight Brainiac drones, Superman gives Kara the bottle city of Kandor to protect from Brainiac drones, Brainiac 5 enlarges it, Brainiac and Zod get down and dirty, the Legion tries to convince Mon-El to return to the future and Luthor starts to grow one of the miniature cities on Brainiac's craft.

It's a busy issue, but hangs together well under James Robinson's script, while the dynamic art of Bernard Chang tells the story well, with one area providing the exceptions; the enlarging of Kandor halfway through, and Luthor's city at the end, are undersold - the final splash, woefully so.

Still, this is a respectably entertaining chapter and it moves the story along nicely. 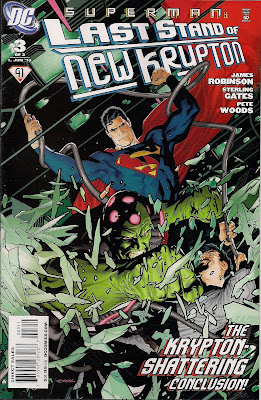 LAST STAND ON NEW KRYPTON #3: 'The Krypton-Shattering Conclusion' yells the cover. 'Conclusion' I'd argue with, but New Krypton is certainly shattered as the Luthor city causes Brainiac's ship to crash on the surface of the newly enlarged city. Over 10 pages.

Sounds stunning, doesn't it, but the bombast is actually rather tedious - the scene could have been done in four pages, tops ... but this is a $3.99 book so there are 30pp to fill. That'll teach me to moan about scenes being undersold in Superman #599.

The consequence of the crash is that Superman is horribly injured, for about five minutes - the Legion are pretty good at curing bleeding Kryptonians. Meanwhile, Brainiac kills Luthor for smashing his ship, but it turns out to be a robot. Zod fights Brainiac (again) and we get DC's 400th variation on the Superman movie's 'Kneel Before Zod' scene. While Superman and Zod argue over whether Brainiac should die, Brainiac 5 grabs his ancestor and departs for the future. The issue closes with Luthor getting a presidential pardon for aiding General Sam Lane in his anti-alien efforts, and Zod - not appreciative of those efforts - declaring war on Earth.

This isn't a terrible comic, with writers Gates and Robinson writing a lively script and Pete Woods doing a rousing job on the artwork. But it feels very much been there, done that - the same people running around bashing one another, with Superman urging a peaceful solution, Zod driven by misguided patriotism and machismo, the Legion popping in and out according to their mission parameters and so on. Were the story to truly end here - or at least, end as definitively as a comic story ever can - I'd be better disposed towards it. As it is, we're just moving on to the next stage of the conflict. But before that ... 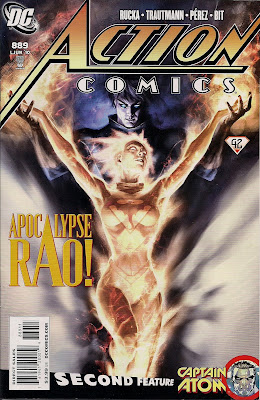 Moving on ... oh don't make me dwell on this comic. It's basically the same one we've had for the past several months. The JSA is fighting a big giant in the wilderness, a fake manifestation of the Kryptonian god Rao, or something. Thara and Chris are channelling the spirits of Kryptonian gods Flamebird and Nightwing. A third Kryptonian god, Vohc, the Breaker, is running Pseudo-Rao, and he's being hosted by evil Kryptonian Jax-Ur.

I think that's a fair summation, anyway. I just can't focus my interest on all these celestial shenanigans and while I could go back and re-read, I don't want to. The truly mythic thing about these strips is the legendary level of boredom they engender in me. Too many revelations and destinies and true selves involving people I don't care about. Kryptonian God bless talented writers Greg Rucka and Eric Trautmann, and artist Pere Perez and Bit, for ambition, but to me it's not so much epic, as 'eh?'

At the end of the strip, Nightwing and Flamebird, flesh once more, leave to - well, it's not made clear, but I imagine they're off to get killed in War of the Supermen. Please. The JSA is handling the clean-up and who should sneakily show up to claim the body of Not-Rao for experimentation but Lex Luthor. Oh, what a surprise, that never happens.

The back-up strip here is Captain Atom in which, having defeated the evil witch Mirabai, he learns that one of his barbarian pals is actually the evil wizard Mordru the Merciless. Mordru says to chill, he's not as bad as Mirabai, so Captain Atom doesn't fight him, in fact he's pleased that Mordru can send him home as he has a JLA series to attend to.

This back-up has been prettily drawn by Cafu and decently written by James Robinson, but it's never made much in the way of sense. We might as well have had an editor's note on the main strip saying 'Captain Atom is no longer a multi-dimensional murdering despot. Don't ask us' and given the back-up pages to Rao's Illustrated Catechism or something (actually, we had that about four months back). 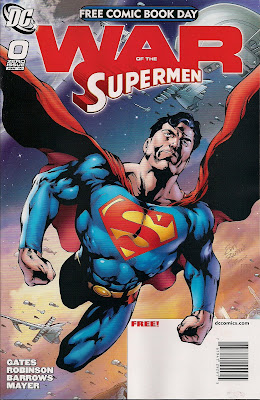 WAR OF THE SUPERMEN #0 Can I moan about this? It was free, after all. Oh why not, it's not the biggest complaint: that's a peculiar cover Superman from the usually dependable Eddy Barrows - too many grim dark lines on the face, I think.

No complaints about Eddy's art inside, though, he handles the first short beautifully. The story is 'Zod has declared war on Earth and Superman ain't happy' which I know, but some of the Free Comic Book Day people maybe don't. It's OK. Writers Gates and Robinson do just fine, given that they no doubt aren't supposed to do anything much - we have to buy the four-issue mini that follows for actual new story.

The second short has Lois Lane recapping yet more recent events and introducing the players for latecomers. It's nicely scripted by that man Robinson again, with apparently extracted art from various clever illustrators.

As free comics leading into events go, the quality isn't isn't half bad. It may persuade a few existing readers to try the mini. It's equally likely to put off any non-comics readers who wandered into a comic shop for FCBD, as it obviously requires commitment, and cash, to follow the story.

I'll keep reading as I'm invested in the story. Not emotionally, more in the sense that I've had to take out a mortgage to follow it. The New Krypton sequence ends with issue #4 of War of the Supermen. Supposedly. Please God, or Rao, anyone really, make it be over. I've had enough of artificially extended storylines, exceedingly dumb Kryptonians, Superman being naive and Supergirl not getting to have her own adventure. There have been some good moments over the past year - the growth of Mon-El in the Superman title, mainly - but not enough to justify the serial's length.