Superman: War of the Supermen #1 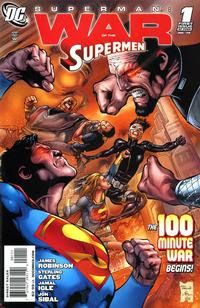 Zod has declared war on Earth, Lois Lane rallies Superman's back-up team to take down her army chief father, who caused said war, Luthor blows up New Krypton via Reactron, and Supergirl weeps for mother Alura before taking up Krypton's flag ... she's not, is she?

It's an incident-packed issue but War of the Supermen #1 feels like prologue - I was hoping that after months of preamble in the Superman books proper, and a #0 issue for Free Comic Book Day, this issue would come in with all guns blazing, and feature open warfare between Superman's two worlds. But by issue's end no one on Earth even knows they're being attacked. No doubt issue #2 will rectify this, and thank goodness, as I'm fed up with Superman and Zod's super-pissing contest.

The gimmick this four-issue mini is partly being sold on is that it's 'The 100-minute war' but there's no special sense of urgency here, this reads like just another perfectly competent issue of New Krypton-era Superman; a countdown timer might have added to the drama. It's a shame that despite all the happenings, the thing that gave me the biggest kick was seeing the Silver Age Kryptonian flag show up.

The final three parts appear over the next three weeks. Hurry up, I say. With the remit to actually end a story for once, I'm confident writers James Robinson and Sterling Gates will wrap things up swimmingly - well, bar Luthor getting punished, as he's off to star in Action Comics. And Luthor can never get punished, it's the law,

If the artists who follow this time's Jamal Igle do as good a job as he has here, with inker Jon Sibal, I'll be a happy bunny. My favourite moment features Superman stopping while fleeing Zod's men to strike a defiant pose. I do like a bit of attitude.

Oh, and a billion demerits for whichever Brainiac decided the appropriate image for this issue's DC Nation write-up advertising the mini was the spread of New Krypton's demise - it's supposed to be a surprise!
Superman: War of the Supermen #1