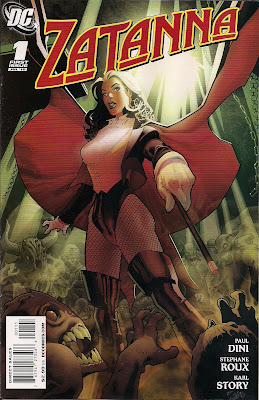 The bad: Zee's too busty.

The good: Everything else. This is a stylish little comic, as the first-ever Zatanna ongoing debuts. The backwards-talking magician shows a terrifically conceived mystical mob boss and his band of demons what's what after they begin to strike at the mortal world. And apart from the introduction of presumably supporting regular Detective Dale Colton, that's that for big events.

And that's enough, in the hands of writer Paul Dini, penciller Stephane Roux and inker Karl Story. As well as Zee's sorcerous crimefighting, we see her perfecting an oddly tasteless stage illusion - cough Dr Light cough - and relaxing at home. Whether she's casting spells or chatting to her assistants, Zatanna's a delight to be with, she's at once sunny and serious. And extra value is added with the debut of the heinous Brother Night, aforementioned kingpin of the San Francisco underworld (literally). As characterised by Dini's witty script, and Roux's luscious art, he's good for a few more rounds.

Ah yes, the art, I mentioned Zee's bustiness. Seriously. Here she could give Power Girl a run for her money. Except she'd trip due to top-heaviness. 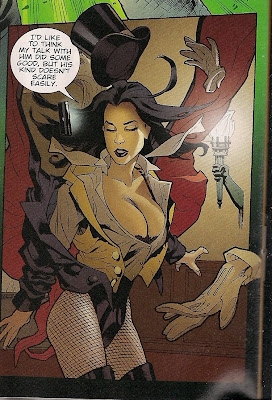 I realise part of Zee's appeal has always been her sexiness - raven-haired girl magician in tux, tights and top hat - but the boys should tone it down just a tad, or no one will be listening to those spells! I do like Roux's depiction of Zee in costume, though the cape is unnecessary and ruins her silhouette, while the new boots are rather the clunky ones. The bright red cherry on the illustrative cake is provided by the colouring of John Kalisz, who finds a balance between shiny superhero and moody crime book that fits this script. And Pat Brosseau's letters are faultless as always.

While triumph comes to Zee rather easily here, there's some foreboding towards the end, and it makes sense to show how competent a hero is in their first issue (she doesn't even need to rely on spells to take a foe down); by the close of the book we can see some mystical spanners about to be thrown into Zee's works. I can't wait - if Dini keeps the witty, clever scripts coming, and Roux continues to share his dark vision of San Francisco, I'm here for the duration.