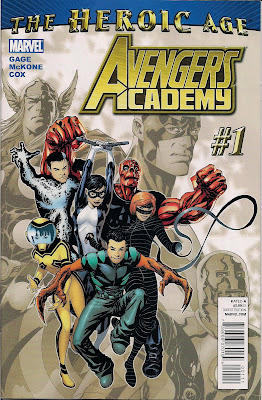 Spinning out of the recently concluded Avengers: The Initiative series, Avengers Academy gathers six young would-be heroes and puts them in the hands of experienced Assemblers. Out of the dozens of teenagers in Norman Osborn's Initiative programme, Reptil, Hazmat, Finesse, Mettle, Striker and Veil are the best the next generation has to offer.

At least that's what the senior Avengers are telling them ...

... the truth is a little more interesting than that, and it's worth sticking with this daringly unflashy first issue to learn it. Writer Christos Gage and artist Mike McKone present an engaging bunch of newbies here - all but Reptil are making their debuts - and with the Wasp (Hank Pym version), Justice, Quicksilver, Tigra and Speedball as permanent instructors, we're guaranteed character-based fireworks (click to enlarge). 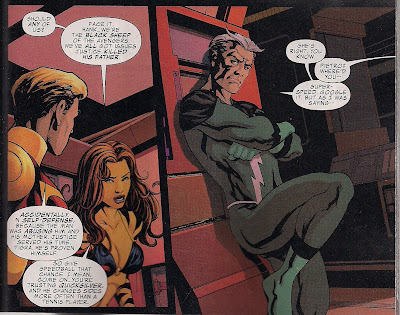 So, the teachers at Avengers Academy - based in the Infinite Avengers Mansion created by Hank in Dan Slott's superb Mighty Avengers run - have been selected because they've had as many bad times as good. I like this idea, as it means the young 'uns aren't going to assume life as an Avenger is all priority cards and parades. Just so long as there's an occasional visit from Cap'n Steve Rogers to give them someone shining to aspire to.

The power sets, so far, are pretty much superhero archetypes - energy hurler, super mathlete, body morpher, strong guy, fading female and stuck-in-a-suit siren - but it's the personalities that will make them stand out. My early favourites are Mettle, for his common sense, and Finesse, for her understandably cocky attitude (it's just a shame her codename sounds like a feminine hygiene product). But I can see the league table shifting from issue to issue.

Wispy woman Veil, Maddy Berry, is our point of view character, and she's appealing so far as needy wallflowers go. The book's opening scene, set three months ago, has me immediately empathising. I can see her blooming, as she faces the kind of curves thrown her way this issue.

We don't get equivalent backstories for the other members, which is fine by me; Maddy's 'origin' is our way into the team's raison d'etre, it'll be fun finding out everyone else's over time, whereas an over-formulaic, repetitive first story would have hobbled this book at the first hurdle.

As it is, there's room to catch up with Speedball, newly costumed by House of Marvelman for his post-Penance period. We see Tigra get some respect, and Quicksilver's view of his tumultuous past. Hank's mental problems are brought up in a way that encourages the belief they won't be a monkey on his back, and Justice, we see, looks set to be an accidental heartbreaker.

My favourite moment sees Hank Pym drop in a piece of information about superhero physiology that makes perfect sense in the Marvel Universe, going back to the earliest days of Peter Parker. It's not some mad retcon, just a subtle piece of info that fits certain facts, yet can be ignored if preferred.

Gage knows what he's doing. While a danger-filled mission might have made this first effort more splashy, it'd be inappropriate on the kids' first day. So we get training room action and it works just fine, giving the Academians a chance to simultaneously show their abilities and personality traits. Their characters, we'll see as time goes on.

McKone's illustrations, coloured by Jeromy Cox, are something special. The new characters are distinctive and alive, while the longterm Avengers seem heroic yet world-weary. Infinite Avengers Mansion looks great, decorated with artwork we recognise as scenes from Avengers covers. If he's taking suggestions, I'd ask McKone to rescue Hank Pym from his current costume - it's just one tragedy too many (don't click to enlarge, it'll hurt your eyes). His new lab coat is a keeper, mind.

The cover illo is suitably Heroic Age, with confident young heroes inspired by the Avengers pantheon. The logo's a shocker, though - who really thinks the front-facing 'cademy' fits with the slanted Avengers logo? Fix it quick, Marvel! Letterer Clayton Cowles does a fine job of getting this issue's script onto the page, let him have a crack. Maybe a new logo based on the original Avengers masthead, as seen recently in Mighty Avengers - a classic look for what will hopefully prove a classic run.
Avengers Academy Avengers Academy #1 review Christos Gage Clayton Cowles Jeromy Cox Mike McKone