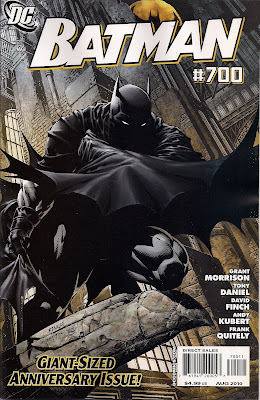 Grant Morrison rocks the ages of Batman with a story spanning the Gotham legend's various incarnations. Bruce and Dick, Dick and Damian, Damian and his cat, Batman Beyond Terry McGuinness, Batman One Million and Robin the Toy Wonder ... all get a moment to shine in a story linked by the time-travelling Professor Hyatt. The Joker's legacy also pops up throughout, and rightly so, given his status as Batman's arch-enemy.

Tony Daniel handles the artwork for 'Yesterday', a Sixties meets Noughties encounter between the original Dynamic Duo and Joker, Riddler, Catwoman, Mad Hatter and Scarecrow. Morrison gives the cheesey Silver Age sensibility a harder edge without going all-out gritty, while Daniel produces some of the most animated art I've seen from him, full of movement and character.

Frank Quitely and Scott Kolins join Morrison for 'Today', as Dick and Damian star in a sequel to Detective Comics #457's 'There is No Hope in Crime Alley'. We see that Batman's presence really has made a difference to the attitude of Gothamites towards walking down urban alleys after dark. 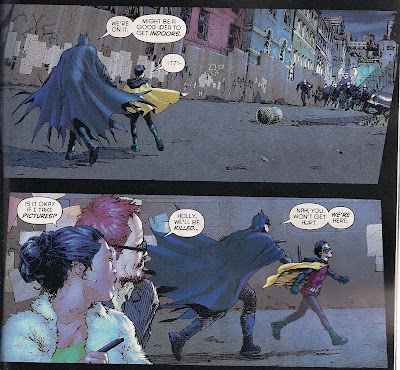 Or maybe that's just one dumb rich broad. Still, Holly's question does facilitate that definitively Dick moment - the 'laughing, fighting, young daredevil who scoffs at danger' has aged rather well.

Damian similarly remains himself for 'Tomorrow', with Andy Kubert on hand to draw up a deadly dreich Gotham of the near future. There's a rain of Joker venom, the wonderfully named 2-Face-2, the creepiest baby ever and the contradicting of Dick's surprising assertion to Damian in the previous chapter that he'd make a rubbish Batman.

An appearance by Batman Beyond has me concentrating hard to see if I could possibly care less. Hang on ....

They also handle the last two pages, which are simply gorgeous - the final image is, of course, the current Batman and Robin, but before that we get the best shot of Commissioner Gordon and co standing by the bat signal I can recall - the composition, the lighting, the colouring by Peter Steigerwald - it's breathtaking. And unless my eyes have gone all Rorschach test, the artists have sneaked in a couple of buildings to form the Batman silhouette, complete with windows as utility belt. That could be a tribute to the classic cover of Detective Comics #567 - look it up at the Grand Comics Database if you're not old!

These final story pages make up for the 'not again' cover of this issue. Batman. Gargoyle. Yawn.

Never mind though, as anniversary issues go, this is a treat. It's similar in theme to Brave and Bold #200, in which the Batmen of Earth 2 and 1 tackle the same mystery, decades apart, but the tone is pure 21st century. (And I realise I'm waxing nostalgic, but it is anniversary time, innit?)

Incidental pleasures include the coining of a great term to describe Adam west-era villain team-ups, 'popcrime'; a hint that Nightwing will be back soon in the way we see Dick misses his escrima sticks; and this grin-inducing sequence. 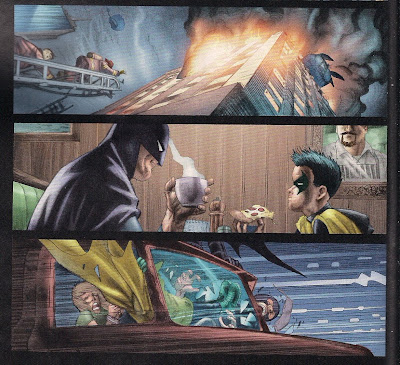 Backing up the lead feature are pin-ups by the likes of Philip Tan, Dustin Nguyen and Shane Davis. There are some striking images, with my favourite being Bill Sienkiewicz's haunting illustration of Batman in a pseudo-London.

Finally, Freddie E Williams II brings us a believable Batcave, while Matthew K Manning describes its delights. And the seeds of a future mystery are planted via the mention of Sublevel 7 (purpose known only to Batman).

A tribute to the Batman legend by talented creators, I can't imagine many Batman fans not finding lots to like here. Wholly enjoyable, Batman!
Batman #700 review