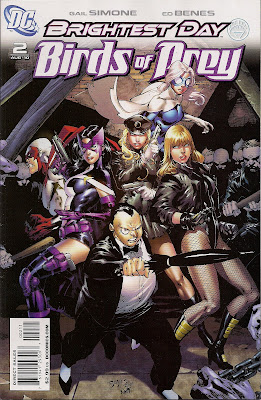 Black Canary and Huntress are confronted by mystery woman the White Canary and the former is in a proper tizzy. 'Something about this particular nutcase makes me have to fight to keep from running.'

What it is, I don't know. So far, the newcomer has simply been standing there, glaring at the heroines like Paddington Bear with his 'hard stare'. Sure, she's wounded the Penguin, but he's not known for fighting prowess. Eventually, Huntress Helena and Canary Dinah attack and WC (such unfortunate initials) wipes the floor with them, kicking elegantly, slashing with her spiky hair decoration and generally proving that two into one somehow doesn't go. Finally, Huntress grabs her and Dinah smashes her fist into WC's face several times, blows which should at least disable the girl, if not kill her. But she's fine, surviving until Hawk & Dove and Lady Blackhawk arrive ...

WC slices open the supposedly invulnerable Hawk, while Dove takes her peaceful image to extremes by simply floating around. Hotshot markswoman Lady Blackhawk points, at one point, but does nothing. Oh hang on, the heroes do manage one mini-triumph - Hawk pulls some of WC's hair out. Big win there, they can analyse DNA later and be puzzled by what they find.

As fights go, this is up there with the JLA v Deathstroke in Identity Crisis. So a severely outnumbered villain punks experienced heroes who forget that they're meant to be a team. WC escapes when a GCPD chopper arrives after a news helicopter lets their location be known - the media is in a frenzy, having been fed lies about Dinah by the unknown enemy who's been messing with the Birds since last issue. Worse still, the mysterious manipulator reveals the identity of Black Canary to the media, along with details of her almost-daughter Sin (who may be the White Canary, via time travel, ageing-up jiggery pokery or a really great sports bra).

Also this month, the enemy murders one of Oracle's associates - fulfilling WC's threat that 'one of you will die every hour for the next six hours' - prompting another to kill himself. The characters in question are favourites of many BoP fans, more, I think, to do with their ticking minority boxes than any huge worth - but good on writer Gail Simone for at least killing characters she created.

Anyway, Oracle is upset, but grits her teeth and resolves to win the day. The deaths of male supporting characters incite the female star to reach new emotional heights ... I think this is Simone having a giggle at the whole Women in Refrigerators business.

As usual with her scripts, Simone provides some fine, fun dialogue, but as happened regularly with her recently concluded Wonder Woman run, there are some headscratching moments. The big one here is the question of Dinah's sonic scream, which can blast holes in mountains. She has amazing fighting skills but this is her power, one she should have used against White Canary. Black Canary doesn't even consider using the yell. Later in the issue she's quick to employ it against Gotham cops, but still, unless Dinah's scream is randomly failing her, it should be her weapon of choice when martial arts just won't win the day. If she's not going to use it, I want to know why.

Then there's Dinah's decision to have the Birds take on the police, when the option exists to surrender as a delaying tactic, or beat a retreat. For the daughter of a cop, working with Oracle - child of Commissioner Gordon - it makes no sense that they'd attack non-metas with the badge on their side. I don't care that some may be corrupt - 'may' doesn't cut it.

One problem which I hope will be resolved over time is the addition of Hawk and Dove. Citizens of Washington DC, they've no reason to be hanging around Gotham in the first place and have so far contributed little to the book. Actually, nothing in Dove's case, though we're told she's 'the conscience of the super-hero community', which is new to me. Oh, and despite her super-intelligence she's suddenly talking as if she's in My Little Ponyland, what with 'Ms Canary' this and 'Mr Cobblepot' that. Much as I liked the characters when they had their own series, they make this one too crowded and I'd be happy if they flew off for a mini showcasing their actual powers and characters.

Ed Benes pencils and inks some great pages, with part of the book drawn by Adriana Melo, and inked by Mariah Benes. It's generally very good stuff, though there's the odd pervy contortion (Dove, Im looking at you - and so is the Penguin). 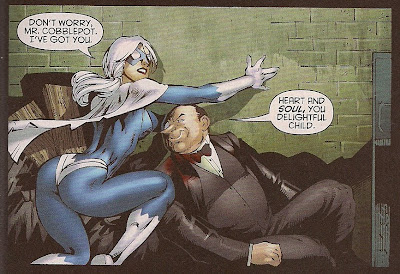 The initial fight between Canary, Huntress and White Canary looks great, but there's nothing to convince us WC is anything other than just one more female master martial artist to join the likes of Lady Shiva, Cheshire and Lady Vic. So far as the rest of the art team goes, Nei Ruffino's colours are rich, Steve Wands' letters full of character and the pair help knit the two pencillers' pages together.

I'm a BoP fan, I'm a Simone fan, so I'll keep buying to see how things settle down, but I was disappointed by this issue.
Birds of Prey #2 review