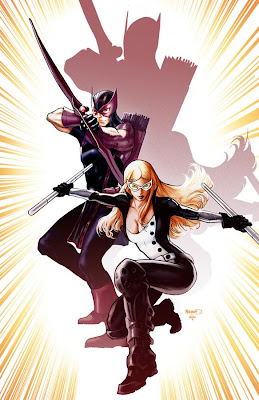 The debut issue of Clint Barton and Bobbi Morse's first ongoing series opens with the partners in crimefighting on the trail of gun-runners. It's tough to make a high-speed chase work on the comics page, but it's pulled off here. Hawkeye and Mockingbird use bow, baton and banter to win the battle, but the war is far from over, with an old enemy revealed to be up to ... something.

Aiming to find out just what, are the super-spies in Bobbi's World Counterterrorism Agency, an engaging bunch including obscure Marvel soldier of fortune, Dominic (a lot of energy went into naming me) Fortune. Hawkeye, meanwhile, is en route to pissing Bobbi off by going behind her back in a bid to offer help she hasn't asked for, and Bobbi is en route to pissing Clint off with her creative approach to covert agency finance. What's more, a figure - or rather, a spirit - from the couple's past emerges to spark big trouble.

It's difficult to type while I'm applauding. Writer Jim McCann has scripted the perfect superhero debut issue. The leads are introduced via an action scene showcasing their skills and relationship, and when things calm down we get background and more leisurely introductions, of characters and plots. There's even room for a scene with Hawkeye and fellow Avengers Steve Rogers and Bucky Barnes, pointing out that former cocky upstart Hawkeye is today one of the most respected of heroes. McCann doesn't try any tricksy narrative tricks, concentrating on providing a good solid story, simply - but very well - told. It's superheroics with a spy sensibility, comprising action, emotion, humour and mystery.

Clint narrates this issue and the idea works well - I'm no fan of dual narrations, a la Superman/Batman, so Clint and Bobbi handing the perspective back and forth would be an ideal approach.

Artists David and Alvaro Lopez aren't trying to dazzle with visual pyrotechnics - like McCann, they're letting their craft speak for them, serving the story rather than ego. And they're quite the craftsmen, leading us through the book with appealing illustrations. They capture Hawkeye's swashbuckling nature, Bobbi's differently styled bravado and, vitally, the chemistry between them - these two look like they belong together.

If I were to do a spot of back-seat editing (who, me?) I'd give Bobbi back her old, flared mask
- the horn-rimmed specs make her look permanently annoyed. And I'd up the colour gradients. Colourist Nathan Fairbairn here follows the style of the mini-series that preceded this ongoing sequel, New Avengers: The Reunion, and Bobbi has lost her visual pop - she used to be a drop-dead gorgeous blonde, now she has drab vanilla hair, almost the same colour as the jaundiced skin tones. What's more, I'd return Clint to his classic Hawkeye costume - think John Buscema-era Avengers - as the current version seems different for the sake of it, and duller.

But these are tiny quibbles around what is a great book. The whole creative team does a great job, including letterer Cory Petit, cover artist Paul Renaud and editors Rachel Pinnelas and Bill Rosemann. The new story is 22 pages long but feels longer, in a very good way. There's plenty going on and it leaves me wanting plenty more.

'New story'? Yup, there's a back-up which, although it uses a collage of old artwork, has a splendid script by Sean McQuaid recapping all the significant points in the lives and love of Clint and Bobbi. And while it's a dual narration, I'm considering it the exception that proves the rule. Rodolfo Muraguchi designs the pages and does a smart job.

DC failed with its attempt to give us a decent superhero series featuring an archer and a bird-themed blonde. Marvel, though, is quickly getting it right. Unlike the Green Arrow/Black Canary creative teams, whose stories favoured archer Ollie while giving Dinah the shaft, McCann and co find both leads equally fascinating. Which means I do too.

As unpleasant a piece of furniture as Marvel's Heroic Age banner is - see how much better that cover illo looks when you can see the full shadows? - it actually fits the feel of Hawkeye and Mockingbird #1: Clint and Bobbi aren't perfect, but they're heroes through and through, caring for each other and the greater good. The book is dramatic, but there's a tone of optimism that's terribly refreshing after the last several years of doom and gloom at Marvel. This is a fine start to what looks set to be a fine series.
Hawkeye and Mockingbird #1 review