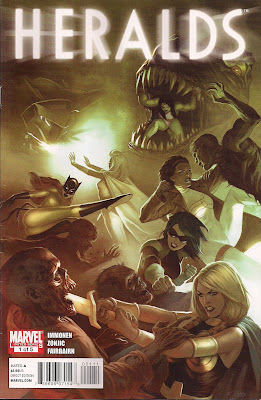 Valkyrie, Emma Frost, Hellcat, She-Hulk, Photon and Abigail Brand, Agent of D.U.L.L.
- sorry, S.W.O.R.D. - team up in an offering from Marvel's Year of Women. This first of five issues has them celebrating Emma's birthday in Las Vegas when they're interrupted by rampaging dinosaurs and dead scientists. Nearby, a waitress explodes ....

Brand originated in the X-books but Lord knows why Cyclops would corral Valkyrie, Monica Rambeau, Shulkie and Hellcat to entertain Emma, I wasn't aware they were more than passing acquaintances, if that. The comic tries to get round this by acknowledging that the X-Men's White Queen barely knows these people - Cyclops promised Emma no surprise parties with anyone she knows. So it's people the readers know instead.

Well, OK ... any excuse to see the hilarious Hellcat is good, and seeing her and Monica drawn once more by Tonci Zonjic makes this feel like a sequel to last year's excellent Marvel Divas mini-series. Roberto Aguirre-Sacasa wrote that one, but here we have Police Squad fan Kathryn Immonen in charge - she previously helmed a Hellcat mini so has form with Patsy Walker, Marvel's most fun-loving heroine. And her fondness for the erstwhile Avenger shines through, with Patsy shooting off some wonderful lines (click to enlarge). 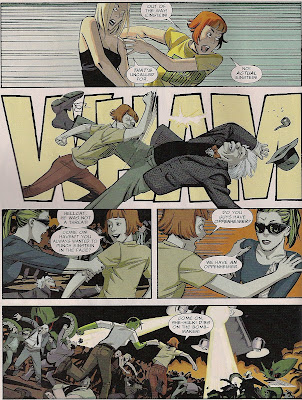 To be honest, I could read an entire comic from Immomen of nothing but characters bouncing off one another - there's a Cyclops/Emma scene here that actually makes their bizarro relationship believable - but we're lucky enough to get high stakes action too, with cosmic shenanigans centred on a hotheaded, mysterious redhead named Frankie, presumably a certain former Herald of Galactus

Zonjic handles the action well, though the panel in which the genius clones first attack tourists might have highlighted Einstein, as he's the only hugely recognisable real-world dead scientist we have. As it is, the heroines react to the scene as if it's obvious geniuses are on the loose, when it really isn't.

Apart from that, I enjoyed Zonjic's work - characters move like real people, the women have individual faces, the backgrounds are full of personality and the storytelling's fine. It's good cartooning.

Jelena Djurdjevic's cover is rendered in a more realistic style than the interior art and while figures and composition are lovely, it's all a bit brown - no one really stands out.

I'll be buying this next month - I'm intrigued by the story, the mix of characters is endearingly weird and you never know, boring old Agent Brand might get eaten by a T-Rex. That's worth $2.99 of anybody's money.
Heralds #1 review