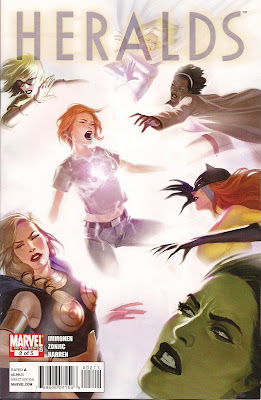 As I took a look at #1 last week (see below), I'll not go into much detail here. So why bring it up again? Because this book is so great that I want as many folk as possible to try it, before it's over. And as Marvel, for some nutty reason, is releasing this five-part mini on a weekly basis, it'll be over before you know it.

So, quick recap - Emma Frost, She-Hulk, Photon, Abigail Brand, Valkyrie and Hellcat have become embroiled in a breakout from a SWORD holding facility sparked by a beam from outer space. Last time they fought cloned scientists, dinosaurs, aliens ... just another day at the office, really. This issue they're gathering themselves when the discovery of a dead chap by the road has them heading for the Las Vegas morgue. Meanwhile, mysterious waitress Frances Hyatt, who exploded last issue, tries to find the strength to pull herself out of a ditch, and Nova, former herald of Galactus and former corpse, flies towards Earth.

So far, so superhero comic. So what's the unique selling point? Kathryn Immonen's script, which manages to be even sharper than last issue's while moving the story forward. And rather than throwing random jokes at us, the banter between the heroines is spot-on for the individual personalities. In the tradition of Sally Brown, rather than tell, I shall show (click on image to enlarge, ta).
The TV news report cliche becomes entertaining ... 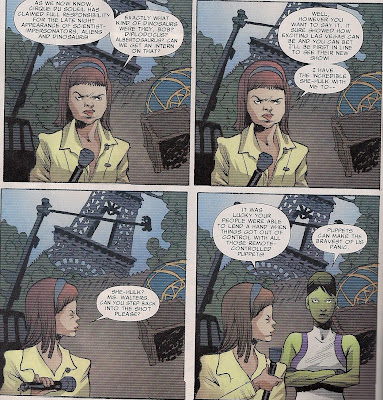 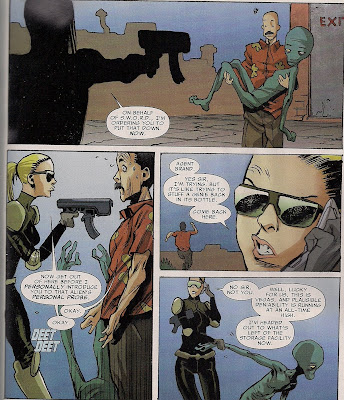 ... Shulkie comes over all philosophical ... 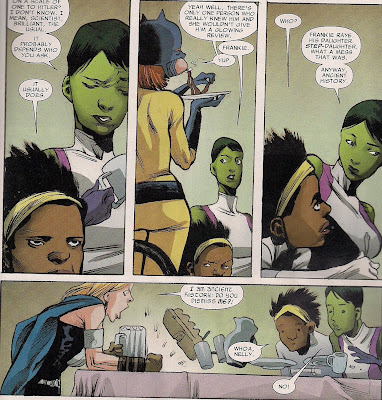 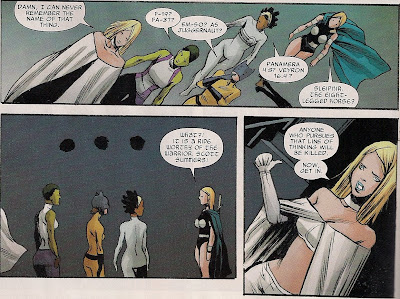 It's not all fun and games, Immonen excels on the serious side too - but it's the funny stuff I was dying to share, as it's so hard to get the rhythms of humour right in comic books. How much bad Spidey dialogue have you read? And there's plenty more where these excerpts came from. The scene in which the ladies use different approaches in a bid to gain entry to the morgue, for example, shows they're not interchangeable Marvel women.

Tonci Zonjic doesn't provide all the artwork this issue, as James Harren pitches in. I'm no expert (as is obvious from reading, oh, a whole review by me) but I'm guessing Zonjic handled all the Frankie Raye (oops) scenes while Harren covered the superheroines. If I'm wrong, my apologies. Anyway, while the close-ups are fine, often attractive, some of the midshots are less successful. Shulkie, in particular, is weirdly swan-necked and, with the uncharacteristic short hair Zonjic has saddled her with, looks like a green legume (Pea-Hulk?). I imagine a combination of a rough production schedule, an attempt to reflect the funnier bits of the script and a bid to blend in with Zonjic's pencils accounts for the occasional awkwardness. Whatever the case, I suggest a visit to Mr Harren's gallery at Deviant Art - it's full of great stuff.

And I still heartily recommend this book! Buy it before Immonen gets snapped up to write for Big Bang Theory or something - encourage her comics career and you never know, she might just decide to stick around and give us more smart superheroics.
Heralds #2 review