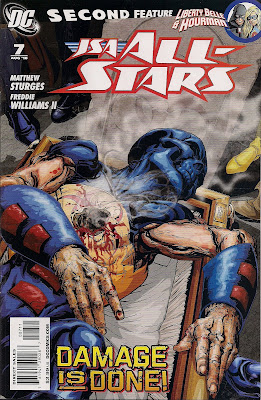 Matthew Sturges is a mischievous fella. Here he uses a funeral story for JSA member Damage - killed in the recent Darkest Knight storyline - to make me finally like the guy. The explosive Grant Emerson has been in the 'angry young man/self-pitying tosser' category for years, but here we find that he finally found peace before winding up in pieces.

Learning this fact alongside me this issue is Judomaster, who has been in dire need of a focus issue since she turned up on the JSA a few years ago. Until now she's seemed little more than a trademark placeholder, a cypher who kicks villains into corners while muttering in Japanese. Recently, though, Sturges has developed a cute little romance between Judomaster, aka Sonia Sato, and Damage, making her the perfect person to eulogise him. She gets to know him better after his death via a revelation by Sand and a taped message from Grant himself.

While Judomaster can't get revenge for Grant's crossover cannon fodder death, she does set out to murder some guy named Tiger, who was involved in her father's demise. Being Judomaster, she plans to ... shoot him from a rooftop. Luckily, intervention by Damage, facilitated by JSA colleague King Chimera, stops her becoming a cold-blooded killer. I do hope she gets counselling, though - the fact she comes so close to committing homicide hardly marks Judomaster as a shining example of heroism. After this issue, I know more about her, but am unsure she's worthy of being on the team. Yes, she throws off some bitterness here, but this woman's problems seem pretty deep-seated.

Sturges does a commendable job of getting us under the skin of his two troubled heroes, and throws in decent moments for other team members. And Freddie Williams II's artwork is more to my taste here than in previous issues, with fewer oddly twisted bodies and more good storytelling choices. Mind, with that feminine flaring coat and criss-cross chest rag, Sand is officially the worst dressed superhero today; seriously, I've filled in the paperwork (click to enlarge). 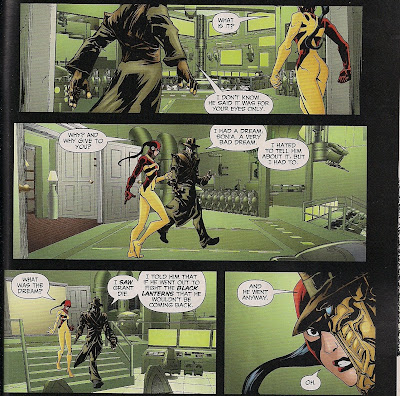 The back-up strip starring Liberty Belle and Hourman, The Inheritence (sic), continues to be an entertaining romp around Europe. Icicle and Tigress are so much fun as reluctant allies that I'd love them to join the JSA as probationers. And Jen Van Meter, Travis Moore and Dan Green should be tapped for a fill-in issue on the lead All-Stars strip, they've a great creative chemistry and feel for the heroes. The only thing I'd advise to All-Stars editors Mike Carlin and Rachel Gluckstern would be a reader-friendly recap before each episode, but it's likely too late now.

Finally, the cover's ugly, grisly and not reflective of the issue's contents - Damage died months ago, a heroic pose for his home book would surely have been more fitting.
JSA All-Stars #7 review