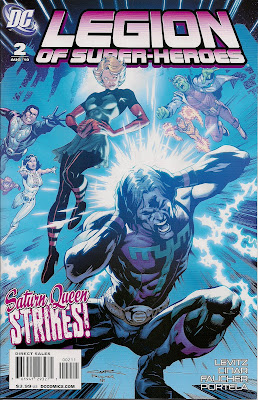 Titan has blown up and the Legion are reacting on two fronts. There's a sub-team in space looking after search and rescue and another on Earth trying to keep peace at the camp set up for Titan refugees. Saturn Girl is in the timestream searching for her missing kids. Lightning Lad and Lass are leaving Winath to assist her. Dream Girl, Dawnstar and Gates are on a diplomatic mission to Naltor. The xenophobic Earthman is, in his own way, trying to work with the Legionnaires. And Titan-born villain Saturn Queen takes control of one of the most powerful Legion members.

This is not a dull issue. With 30 pages to play with, writer Paul Levitz can give good face time to 19 team members. Nineteen! I don't think we've seen the like since the Eighties, because most writers aren't as confident in their talent as Levitz. Or maybe just not as talented. They stick to small casts and even then, team members often all sound the same ('... the hell!'). There are no identikit folk here, though, with plenty of personality on display. Even without the visuals, there's no way you'd mistake Brainiac 5 for Ultra Boy, or Invisible Kid for Gates, for example.

With the visuals, this is a gem of a comic, Hill Street Blues with superheroes. Characters and storylines are quickly and efficiently sketched in, with adventure always at the forefront. The Legion are working to make the United Planets safe for all sentients, acting as a mature team rather than snarky teenagers. So when Cosmic Boy keeps the alien-looking Chameleon Boy away from the xenophobes, I baulk, but as a political decision it makes sense - quiet the mob now, raise their consciousness later; safety first, all the way.

This version of the Legion is basically the original team last seen around the time of Crisis on Infinite Earths, but with the addition of the always fun Gates from the 'Archie' years. It gives a new look to the rarely seen Tyroc, making Marzal an actual world rather than an embarrassingly segregationist island for black folk (don't ask me how his sonic powers work in space - vibrations rather than sound?). It's the best of the Silver, Bronze and Modern Age team, a tasty legion jam for today.

I'm gushing, aren't I? But look at the way Brainiac directs superhero traffic, how Sun Boy lets his feelings be known, how vicious Saturn Queen is, how Saturn Girl is calm without being cold. This is the work of a writer in his comfort zone, yet ready to stretch beyond it.

Mind, Wildfire really does need an invulnerable costume - how many times has he been rendered useless via the simple tactic of exploding his suit? Or perhaps he could actually learn how to be effective in his shapeless energy ball form?

I'd love to see Levitz say bugger it, and just bring back thought balloons. He can work the narration boxes as well as anybody, and their distinctive looks make sense, but really, what's wrong with a simple bubble? The tool worked for generations. The thought boxes are like kids who laugh at their parents, only to one day realise the old guys were right after all.

And boy oh boy, the artwork is marvellous. Yildiray Cinar shares the book with Francis Portela, with the former inked by Wayne Faucher and the latter handling his own blacks. I could guess at who drew which scenes (come on DC and Marvel, gives us credits breakdowns like in the old days of, oh, a year or so ago), but the entire book is a love letter to spiffiness. The updated costumes look particularly good as rendered by Portela (that would be one of those guesses), recognisably superheroic sexy, but wearable. 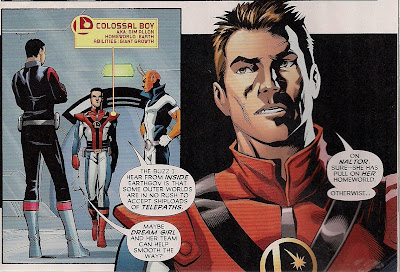 If I were to pick a favourite scene from the eye candy point of view, it might be Saturn Girl's journey through time, for the kinetic layout and smooth colour effects from Hi-Fi - which I'm attributing to Cinar. Or it might be every scene Portela's sultry Shadow Lass appears in.

The colour is also wonderful on Cinar and Faucher's cover - a nice pink logo to tone with Saturn Queen's costume - unusual, and attractive.