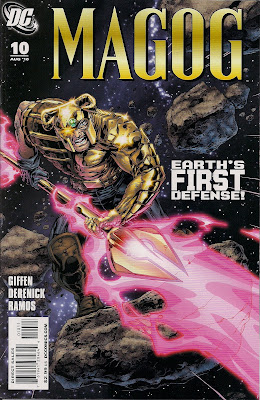 You know you're old when you see Tommy Tomorrow in a comic, assume he's on a sortie from the future, then realise that our present day has caught up with the fella.

One of which is this, my first issue of Magog. Firstly, because I wasn't a huge fan of Kingdom Come, didn't like Magog in JSA, hated him in JSA All-Stars and so had no wish to follow him into his own book. But hearing that Tommy and his Planeteers, interstellar policemen and stars of their own Silver Age DC strip, were appearing, I couldn't resist.

As it is, Tommy isn't an active participant in the conflict, acting as the spur for Magog's heroics rather than joining him, but it's fun to see him - and he's hardly changed a bit since 1953. 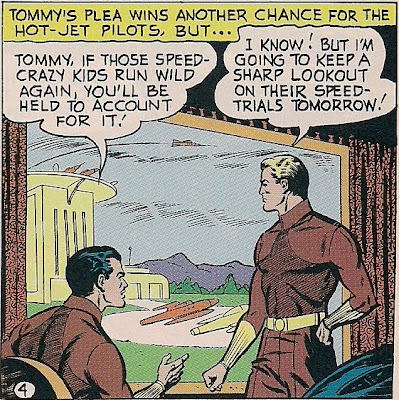 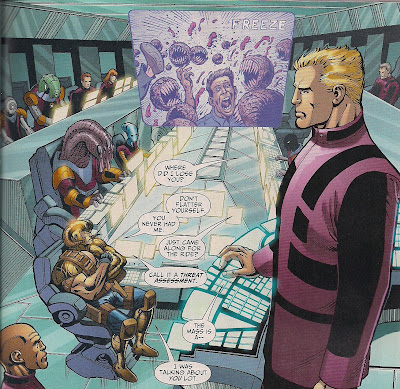 And I appreciated his point when asked by Magog why the Green Lanterns aren't involved, that even with 7,200 GLs, space is big. Really big.

See those toothy critters in the background of the modern image? They're The Cache, part of the threat here, a huge cosmic thingie called The Mass which eats people after sending down The App to infiltrate planetary ethernets. I suppose this is what you'd call a definitive threat. But The App? There may well be some irony in Keith Giffen's script for 'Yesterday, Today and Tomorrow'; Tom Derenick is certainly having a ball with those 'Tribbles with teeth', going all EC sci-fi with the artwork. Let's see that again. 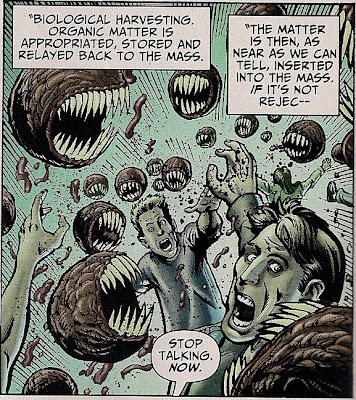 I suppose it's not funny if you're the one being eaten, but it looks a hoot.

He may be a brash bugger, but Magog's a good soldier for Earth, and is soon standing on a rock in outer space, zapping spaceballs with his mighty spear. By issue's end the threat has retreated, but not before leaving Magog with troubling questions relating to free will, destiny and the possible future of Kingdom Come.

I enjoyed this comic more than expected. Giffen's narration by Magog makes him far more sympathetic, more interesting than in other appearances I've seen, while Derenick's pencils, inked by Rodney Ramos, make that ludicrous costume work. Muscles straining, 400 teeth bared, spear slicing through the air, Magog is rather the impressive figure. And the mystery of his future, along with what I've heard about some weird relatives, may get me trying a few back issues.

See what happens when ancient characters like Tommy Tomorrow are dredged up? Next I'll be buying Azrael cos it features Johnny Peril...
Magog #10 review Giffen Derenick Ramos Tommy Tomorrow