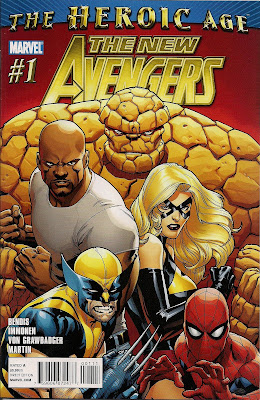 Luke Cage, quit that &?*£!% cussing, this is the Heroic Age. Yes indeedy, the New Avengers get shiny in this second volume, with Cage and co moving into a rebuilt Avengers Mansion and finally considered good guys in the eyes of the world.

The story kicks off with Dr Strange meeting a possessed Son of Satan, Daimon Hellstrom, and getting mystically tagged himself. Then, at the party featured in last month's Avengers #1, Cap'n Steve Rogers asks Luke's team, until recently outlawed vigilantes, to come into the light and work for him. Luke's agin that, not wishing to answer to any government figure, even one whose cleanness fair squeaks. Cap has the answer - be your own Avengers team, but keep in touch. And Tony Stark 'sells' Avengers Mansion to Luke for the not exactly princely sum of $1, which he's borrowed from the wealthy Iron Fist.

Hurrah, the New Avengers have been given free reign, they can be their own men and women in their own HQ ... so what's former Norman Osborn Number Two Victoria Hand doing 'welcoming' them with a ruddy great gun? Hand hands over a letter purporting to be from Cap asking the team to babysit her, give her a shot at redemption. An obvious fake, thought I, no way would Cap go back on his word within hours, dumping them with a woman they've every reason to distrust, hate even, and via a scrappy piece of paper at that.

Apparently he would. The scenario is presented as straight up, and after understandably stiff words, the Navvies (as absolutely no one is calling them) agree to give Hand a shot.

Really? Until this point I was thoroughly enjoying 'Possession'; it felt like an Avengers comic of old, as members and the book moved on, with the events of the last few years ready to be forgotten. But no, here's an idiot with only negative feelings for the Avengers parachuted in, presumably to provide character conflict. Given the ranks of the team - it's pretty much the New Avengers as was, ie Luke Cage, Spider-Man, Jessica Drew, Hawkeye, Mockingbird, Wolverine, Iron Fist and Ms Marvel, with the Thing signing up here cos Cage likes having him around - it's not as if the book lacks opportunities for engaging interaction. Plus, we already have a tough cookie hanging out with Earth's Mightiest Heroes in the form of Maria Hill in regular Avengers.

The Avengers have had annoying admin folk previously, and I've no doubt writer Brian Michael Bendis can make Hand likable, but it makes no sense to me that Steve would ask the team to take her on, especially in such an underhand manner, or that they'd agree. I can see Luke agree to Cap's appeal to give her a chance, as Luke himself was given a chance via the Super-Soldier Serum, but I can't see him letting her get close ... especially after waving that gun in the face of his and Jessica's kid. By all means, work up a Hand job, but she doesn't merit becoming Cap's eyes and ears in the New Avengers. The 'Redemption is our business' new Thunderbolts would be the perfect place for Hand to show what she's made of.

For my borrowed $1, Tricky Vicky can bugger off back to the poodle parlour where she gets that magenta put into her hair, and the New Avengers can welcome back Edwin Jarvis, Duane Freeman or Henry Peter Bloody Gyrich. But a Green Goblin lackey who's still defending her former boss? Does not compute. Well, unless you're Ultron.

Ooh, went on a bit there. Breathe. Forgetting Hand, there's plenty to enjoy this issue, from the works-on-several-levels title to the stonker of a final page. The scene with Strange, Hellstrom and, later, Dr Voodoo are gripping, featuring such marvellous enchantments as 'the Longorian Spell' (oddly, it doesn't give you lovely shiny hair). There's a moment between Cage and Hand that had me clapping. 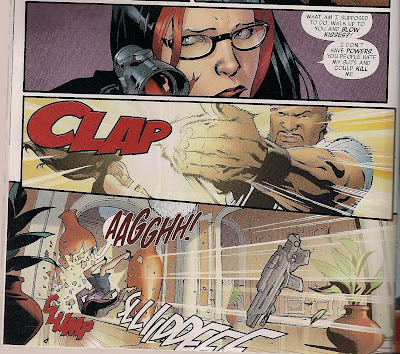 Plus, Wolverine gets metafictive in a cute exchange.

There's massive pleasure to be had in the sleek art of Stuart Immonen and Wade Von Grawbadger. The heroes look, well, terribly heroic in this post-Siege moment. New York looks like the gleaming centre of the universe, New Orleans a mystic suburb of same. Even Luke Cage's sofa is gorgeous. Colourist Laura Martin proves once again what a fine mood enhancer she is, giving each scene the appropriate tone and a certain je ne sais quoi, while Chris Eliopoulos letters and handles the production like the mini-legend he is. It's great work all round and I'm in for awhile, something I couldn't say about the previous New Avengers, which never clicked with me. I bet I could even get used to Victoria Hand, given the frustrated humour the artists give her. And Brian Bendis doesn't half make her dialogue with Cage and co fun. But I need to see her apologise hard.

Plus, the spotlight needs to be shared out some more or this book may as well be renamed Luke Cage's Avengers - Luke dominates every scene he's in, which is most of the book, reducing Spidey, Wolvie, Carol and the rest to bit part players and background artists. But it's only issue #1 (again), let's see where we go from here.
The New Avengers #1 review