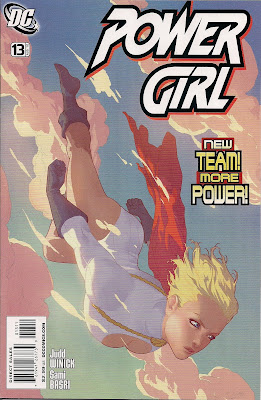 The opening panel of this debut issue by new creative team Judd Winick and Sami Basri has Karen referring to her complicated past - survivor of a parallel Krypton, and all that. My initial reaction is, give it a rest. That storyline's been done to death, Can't we just ignore the convolutions of Power Girl's past and fly into the future.

As the issue goes on, though, the references prove reasonable - having seen Karen angrier than she's been for years in the current Justice League: Generation Lost series, we're offered an explanation here. After seeing her happiness erased once by the Crisis on Infinite Earths, she's wary that the resurrection of the now-crazed Max Lord - who represented happier times with the League after the trauma of the Crisis - signals the end of her current good times.

The issue flicks back and forth between a Max-hunting sortie to Russia with the Justice Society and the daily doings at Starrware Industries. Both scenarios hold the attention, with Power Girl encountering the ever-annoying Omacs in an inventive tussle, and big problems at the office. Plus, Karen's given a pair of earrings-cum-cellphones-cum-plot device*. Well, I'm assuming friendly inventor Nicholas is up to no good, this being comics.

Winick's script is impressive, with Karen recognisable as the person we've gotten to know over the past year, and her supporting cast present and correct. There's a lot of information conveyed without the story getting bogged down. I'm hoping that said story, so far as it ties in with JL:GL ends here, though. Twenty-six issues is enough to tell the Max Lord story, so now we know where it fits into Power Girl's book, that should be it. Winick's had as many brickbats as bouquets over the years, so if he's smart he'll use his two regular books to tell different stories, show his versatility.

I've been reading Winick for years, I know what he can do (Green Lantern good, Outsiders bad). Sami Basri, though, is a new name to me.

Wow. This art is gorgeous. The people look real, wear modern clothing, move naturally, fight thrillingly. I hate Omacs, when they come on panel, I glaze over. That's impossible here, as Basri takes Winick's script and runs with it, presenting the fight scene as ballsy ballet. It's elegant action all the way, with blasts flying back and forth, great grappling and exciting ankle activity (that sounds pervy, oops). But my favourite sequence flashes back to Max Lord's world-wiping, as Sunny Gho's colour choices add drama to Basri's intelligent design (click to enlarge). 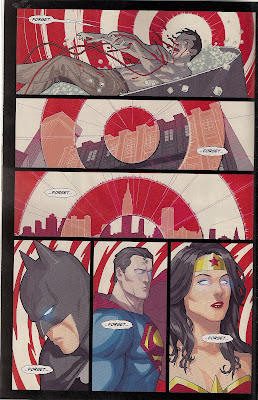 Oftimes, painted-style artwork leaves me cold, with artists presenting a series of barely related images rather than panel to panel storytelling. None of that with Basri, though, as he leads us through the issue with ease. Using a black keyline around the figures is a big plus with me, as it seems to say, yup, this is comic art, enjoy.

There's no keyline on the cover, leaving the image wispier than I prefer. It's still a stunner - a surprisingly placed figure on a gorgeous background. The cape looks oddly short, but I see the reason. It's a shame the blurbs are brasher than the illustration needs, though.

It's a good start for the new team; so long as we don't get lost in Eventsville, this could be a fine run.