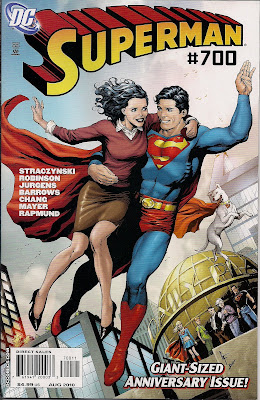 I like that this issue bridges the gap between two creative teams, that is, Robinson and recent partner Chang, and JMS and Eddy Barrows. Robinson gives us a simple tale of Superman and Lois reuniting after the former's year on New Krypton. There's a battle with the Parasite too, but that's not important right now ... Robinson writes Lois and Clark so well as a couple that it's a real shame he barely got to use them together during his time on the book. There's a tenderness here that has me forgetting I was ever against them getting wed in the first place.

Making this story even better is the artwork of Chang, whose work on the book has improved as he's softened his line - it's still distinctive and dynamic, but facial features are rounder, more attractive. Chang doesn't shy away from the fact that Superman is wearing tights, without overdoing the wrinkles, and he has a knack for showing something going on behind characters' eyes. Plus, he manages to make Parasite scary without resorting to the daft shark teeth of recent years.

JMS sets up the coming 'Grounded' storyline, in which our hero will walk across America to connect with the people, via a scenario familiar to longtime comic fans. It's the classic - yet senseless - scene from 1970's Green Lantern #76 that prompted Hal Jordan to drive across the US with Ollie Queen rather than protect an entire space sector (click to enlarge). 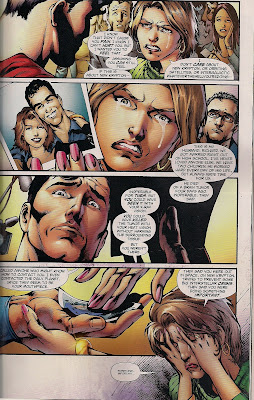 Yes, same idea. A man on the scene reasonably points out that Superman can't be everywhere, but screw that is Angry Lady's response - he missed helping her fella, that makes him scum. Superman is speechless throughout her rant, but once she's flounced off he springs into action. He's soon off chatting to Batman about the type of injustice the JLA tackles and mystifying Flash with inane questions about what he notices at super-speed. Then it's a mournful glance at the snapshot of the dead husband Widowoman tossed at him, an even pappier than usual Pa Kent memory about being in touch with the soil, some handling of present day muck by our literal-minded hero and a wander off into the distance on foot, as bemused little boys assume there must be an important reason he's not flying. Sorry, kids. 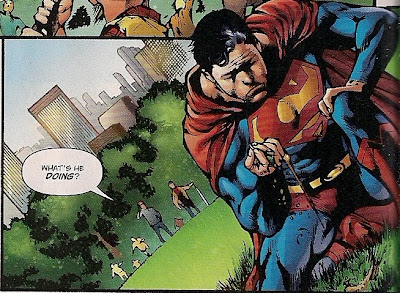 Well, if you're not going to be using it Superman, give me strength! Superman's going to be wandering across the US for a year because a grieving woman threw some ill-considered, selfish words at him? Singularly unable, or unwilling, to defend himself, Superman looks like a dumb loser, falling in with the expectations of others rather than managing them.

Worse still, like the first story, this prologue is set just after the New Krypton debacle. Superman, having been away from his wife for a year, is apparently leaving her again. Clark Kent, after a long sabbatical from the Daily Planet, looks likely to be AWOL once more. Please God that next month there's at least a 'before he set off walking' flashback shunted into the first issue proper of this story to address these issues; otherwise, Lois should file for divorce citing abandonment, and the Planet should kick Clark out on his invulnerable arse.

JMS has written some great books since he came to DC, so I'll give this storyline a chance, but gee whiz, I like the idea of a cross-continent walk little enough without the pretext being a 40-year old plot idea that was stupid the first time out. Eddy Barrows and JP Mayer at least make everything look purty, though Barry Allen develops a scarily Joker-esque chin in one panel.

It's great that Dan Jurgens, who has contributed so much to the modern Superman mythos, has a story in here too, but the nature of said contribution is a headscratcher. Set in Superman's early years, it's basically a Robin story with a glorified cameo for the star of the book. It's pleasantly written and pencilled by Jurgens, and nicely inked by Norm Rapmund, but it's terribly out of place in what's meant to be a celebration of an anniversary, not inventory.

The rest of the book consists of plugs for the upcoming Superman Family titles - text pieces by the writers of Action Comics, Supergirl and Superboy, and a preview of Action. I could have done without the lot of them, glorified house ads all. There's a lovely cover by Gary Frank, though - it's a shame he's not inside too.

One way and another, this is a comic that looks to the past as much as the future. On the basis of the Grounded prologue and the excellent farewell work by Robinson and Chang, I think I'd like to live in the past.
Bernard Chang Dan Jurgens Eddy Barrows J Michael Straczynski James Robinson John Cassaday JP Mayer Norm Rapmund Superman Superman #700 review