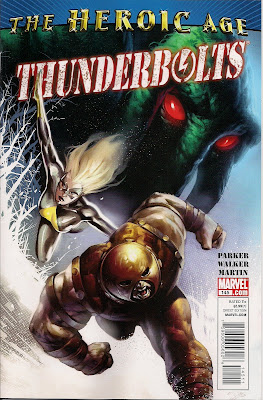 I never saw the end of last issue coming, as Baron Zemo returned to claim the new Thunderbolts. I never saw the beginning of this issue approaching either, but I liked it every bit as much. I won't spoil this surprising turn - yup, I'm trying to push the undecided into buying, here - but I will note that once that business is resolved, the new team goes troll hunting in Oklahoma.

And behind a tremendously attractive cover by Marco Djurdjevic, a fun time is had by all. After using poor old Man-Thing as transport, Luke Cage gets to see how Juggernaut, Moonstone, Ghost, Crossbones and Songbird work as a team. Or not. After the black ops feel of the Dark Reign Thunderbolts, we're in magical territory here, and seeing these strange bedfellows try to capture bounding, gleefully murderous creatures of myth is awfully refreshing. Especially as drawn by Kev Walker, who gives us a cross between Wild Things and gremlins - they look hilarious, but aren't to be crossed lightly (click to enlarge). 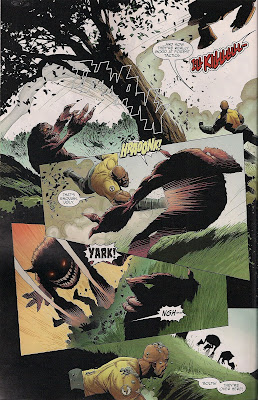 Walker, with colour artist Frank Martin, makes the rest of the issue look great too, whether it's the Zemo battle, introduction of a new-look USAgent as prison warden or monster mucus gags. The excellent raw material is provided by Jeff Parker, who has made this book his own in just a couple of issues - I can't wait to see where his scripts take this bunch of reprobates and reformed criminals. 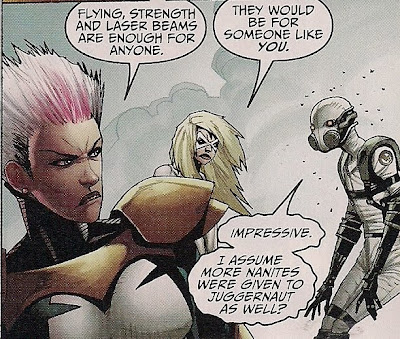 One place I'd dearly love someone to take Songbird is the hairdressers - her new hairdo makes her look like a bad-tempered German welder. Songbird brings my only complaint, though, and obviously it's in a minor key. If you've not tried the new Thunderbolts, give it a crack. It's worth it just to find out the title of next issue.
Thunderbolts #145 review Jeff Parker Kev Walker Frank Martin Marco Djurdjevic